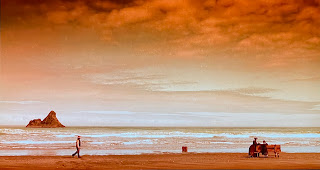 The snowbirds are passing, heading south on Skull Creek almost without exception in boats with masts under power even with the wind behind them.  I notice more than a dozen most days and I am not maintaining a constant watch.  Many must pass that I do not see.  One yesterday did have its jib set.

The distance from Norfolk, Virginia, where the Intracoastal begins, to Miami is given as 1,095 miles.  That is statute miles, not nautical miles.  I googled why the Intracoastal is measured in statute miles, but did not find an answer.  I expect that much of the Intracoastal is beautiful and interesting.  Skull Creek is.  But that is a lot of powering.  Probably more than I have done total in my life.  There is an alternative:  go outside and sail.  That is what I have done on my two round trips up and down the coast, stopping only Beaufort, North Carolina twice and going the full distance from Florida to New York or New England the other two times.  I expect I know why these people power rather than sail.

The image above is from Jane Campion’s 1993 film, THE PIANO.  I saw it when it first came out and then watched it last week on Netflix.  The soundtrack has long been one of my favorites, but seeing the film again was stunning.  If you haven’t for a while or ever, I suggest you should.  It is amazing that such an unlikely film was ever financed and made.  Yet it was a commercial as well as a critical success, costing 7 million dollars to make and earning 140 million.  Quite a decent return on investment.  Sometimes excellence is rewarded.  I will watch THE PIANO again this coming week with Carol.

From a documentary about an expedition that rafted down the Blue Nile: 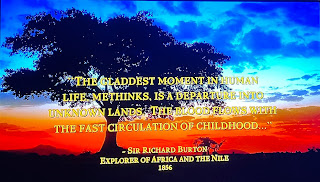 Jane Campion has just produced another movie, the Power of the Dog which Washington Post reviewed the other day very favourably indeed. Can't wait to see it.

Thanks, David. I had not heard of the film, but find it is coming to Netflix Dec. 1 and I will watch.

Power of the Dog is fantastic!
But we went to the big screen....