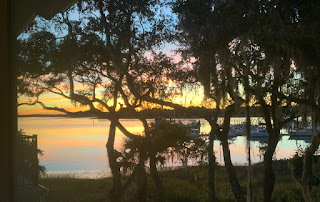 Carol and I spent a lovely quiet Thanksgiving.  She cooked the traditional meal, though for the two of us only a turkey breast—I wonder what they do with the rest of the bird.  Dressing, gravy, green beans, sweat potatoes cut into chunks with onions and almonds, accompanied by glasses of cava.

We ate at 2 PM then walked down to the marina pier and admired the water and spartina and back.

Near sunset we each had a piece of apple pie—Carol’s favorite.

HIlton Head Island has been in a weather pattern of high pressure with clear skies which assure beautiful sunsets evening after evening.  They are a prime selling point for the restaurants a mile or so south of us along Skull Creek.  To us they are the norm, but never taken for granted.  I have posted many photos of sunsets from our condo.  The above was taken Thanksgiving evening. I might one evening set up a camera and take a sequence because the light changes dramatically during the hour before and after sunset.  I live with beauty.  I try to.  I am thankful that I can.

Often I wake during the night and read for an hour or so.  Last night I did and finished the last section of THE 1001 SMARTEST THINGS EVER SAID.  The last section was ‘Proverbial Wisdom’ most of which are so well known they have become cliches.  I was struck by how many proverbs come from Aesop, so much that I googled and found Aesop to have been a slave and storyteller who lived in ancient Greece 620-564 BC, and if he is responsible for what we know as his fables one of our species great originals.  Such a man a slave?

Beyond the known, such as ‘Familiarity breeds contempt.’ and ‘Do not count your chickens before they are hatched.’. Both from Aesop.  Here are a few I like.

If you want to give God a good laugh, tell him your plans.—Yiddish proverb

An army of sheep led by a lion will defeat an army of lions led by a sheep.—Arab proverb

Men often applaud an imitation and hiss the real thing.—Aesop

I can testify to this last as I hope you can too.

This evening after a repeat of yesterday’s turkey dinner though with smaller proportions—I gained an unacceptable pound yesterday—Carol and I watched a good movie on Netflix, WIND RIVER, set on an Indian reservation in Wyoming in which there are a rape and two murders.  In one scene an FBI agent says to the local tribal police chief, “What about back-up?” He replies, “You are in the land of no back-up.  Here you are on your own.”

That is the essential fact of life.  I embrace it.

We fast forwarded your story to the part about apple pie. Yum. Our favorite as well as Capn Jack's. Similar menu here except stuffing was substituted for sweet potatoes.

PS Skipper can tell you what they do with the rest of the bird, ending with bone broth for soup stock. And as a result of acquiring that knowledge in High School homemaking class, she skips ahead to cooking just a turkey breast. Leftovers get made into turkey hash.

Lovely photo, where is GANNET in the pic?

GANNET is on the marina finger near the center of the photo, but hidden by the live oak and other boats. From where the photo was taken from my chair near our bedroom window I can see the upper half of her mast.

Our turkey leftovers finally end up as turkey barley soup which I love. Carol promises to make a pot for me before she flies back to Chicago. I will be sustained for most of next week.