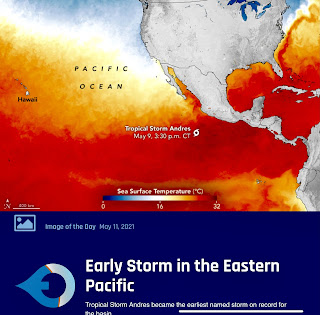 Today’s NASA Earth Observatory site shows the earliest development of a tropical storm in the Eastern Pacific Ocean since satellite records began being kept in the 1970s.  The storm was not as strong as the gale I was in a few weeks ago in the Atlantic and did not last long.

The article states that this is the third time in the past five years that a storm has developed before the official start of the hurricane season, now May 15, formerly June 1.  It seems to me that when an event occurs three times in five years it is normal.

I was talking recently by phone with Jim, another Moore owner, who had the great good fortune to grow up in New Zealand’s Bay of Islands and now lives in British Columbia.  He is preparing his boat for ocean sailing and is planning to fit a self-steering vane.  To resolve the problems caused by the Moore’s thin transom his idea is to mount it on a fitting inserted into the tunnel intended for the Moore’s outboard bracket.  It is the square hole toward the bottom of the transom. 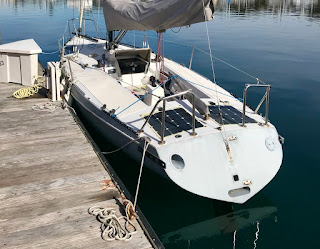 This might be a very good idea which never occurred to me.  That tunnel slopes downward and is heavily glassed into the hull.  If Jim goes ahead, I will be interested to see how it turns out.

Perhaps clarification is needed about the difference between what the compasses were showing  as our heading and our true COG when in the Gulf Stream during the recent sail.

I have two traditional compasses on GANNET.  One hand held that lives in the Great Cabin.  One in the cockpit.  I don’t use them much.  I do use the mast mounted Velocitek; my iPhone 12 Pro; and my Apple watch.  All of which have their own GPS chips.  When sailing toward Bermuda they all accurately showed our bow to be pointing east.  Reading 090º  or close.  Our bow was in fact pointing east.  It was only when I opened the iSailor app and saw our true COG was 030º that I realized how far the Gulf Stream was pushing us sideways.  So I corrected our course until when the bow was pointing 130º our COG was the desire 090º.  The same thing happened in reverse on our way back, except that we were becalmed for a while and had no choice but to go where the Gulf Stream took us.

In the SEASHELL ANTHOLOGY OF GREAT POETRY a few days ago I came across ‘Do Not Go Gentle Into That Good Night’ written by Dylan Thomas on the death of his father.

Somewhere in one of my books when a much younger man I contrasted that poem with Socrates, ‘Why should I fear death, for when death is, I am not, and when I am, death is not.’

Now as an old man I do not expect to rage against the dying of the light.  Half mine went out a decade ago anyway.

On being in the Gulf Stream, I thought this was a simple explication: https://theboatgalley.com/route-planning-cross-gulf-stream/