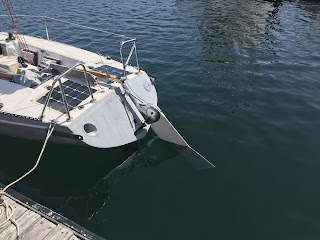 A noisy night.  Not people, creatures.  A Great Blue Heron spent the night standing on the launch hanging from ODYSSEUS’s stern, sometimes screeching loudly, often merely grumbling to himself, and the sea lions were more vocal than usual.

With the dinghy in the water, I removed the other items stowed on the starboard pipe berth and slithered aft and pulled out everything stowed in the dead stern space starboard of the center line.  I’ll do the port side tomorrow.
Among the items is my emergency rudder which, along with the Jordan drogue and my dry suit, I do not regret buying and am very pleased not to have used.
I have not fit the emergency rudder since before the circumnavigation began and decided to do so.  It is heavier than I remember.  Or perhaps I have become weaker.  As you can see it did go briefly in place and is now again stowed below.
I sprayed and wiped down all I could reach with my last bottle of New Zealand's Exit Mold.  There was not a lot of mold there.
I found several objects that I enjoyed disposing of including a length of hose and the PortaPotti that came with GANNET which was moldy beyond redemption.  I have never used it, but will buy another in order to meet inspection if GANNET is ever inspected.

Last evening I came across a quote at the beginning of a film about mountains and partially about climbing them.  “Those who dance are thought mad by those who cannot hear the music.”  I have subsequently found it to be well known and attributed to various people.
I have noted before what I call the dog whistle effect of my life.  There are those who cannot see or understand it, just as we cannot hear sounds dogs do.
This is why I don’t try to answer the question, “Why do you sail?”  People either hear the music or they don’t.
However, I have agreed to write a short ‘why’ piece for Latitude 38.
It is not likely that I will do so before September at the earliest.
Posted by Webb at 8:18 PM