The above shows something I should have done a long time ago and a gift that makes me smile.
On my last trip to West Marine I bought three feet of black 5mm shock cord.  Back on GANNET I cut it into two pieces, drilled four holes, and in less than five minutes had mounts for the Boom 2 speakers.  This has been surprisingly pleasing.  I can reach over and turn them on or off while sitting at Central, set them to play in stereo from an app on my iPhone, and due to this ease have been listening to more music than ever.  I can also easily remove them to take on deck.

Also in that photo is a GANNET billfold that is a gift Carlos made and sent to me.
I hesitated to write about it because I do not want to seem to be soliciting gifts or turning every personal relationship public,  but I like it so much and appreciate the thought that I asked Carlos for permission to show it.  I have thanked him personally for the billfold and do so publicly. 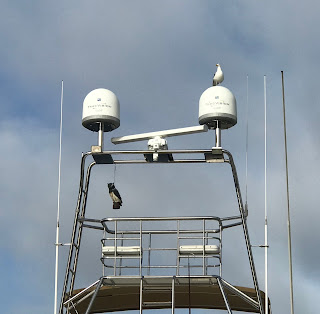 Some believe that sea gulls and other birds can be frightened off boats by hanging a plastic owl on them.  You can see how effective this is.

High tech boats come and go from the boat yard.
These two are there now.
The trimaran has far too much beam for the travel lift and must be raised and lowered with a rented crane which probably costs almost as much as it did for me to get GANNET put in the water in Panama. 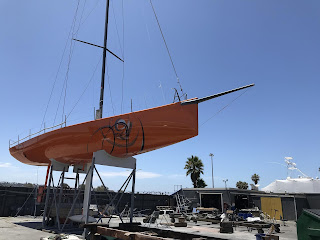 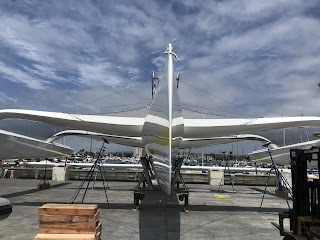 I was asked to make a video of GANNET’s restored interior, which I did yesterday afternoon.  I also took the GoPro on deck to show my evening view.  I will not have a good enough Internet connection to upload it until sometime in the last half of next month.

The GUARDIAN ran an interesting piece about the benefits of walking, both mental and physical, calling it a ‘super power’.

https://www.theguardian.com/lifeandstyle/2019/jul/28/its-a-superpower-how-walking-makes-us-healthier-happier-and-brainier
Posted by Webb at 5:37 PM