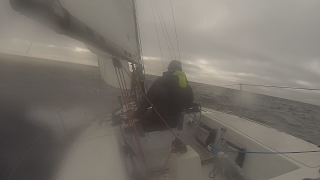 I have posted the first ten videos of the passage from Balboa, Panama, to San Diego, California.

It was a long passage and there will probably be more than thirty videos in all.  They are not mandatory and there will not be a snap quiz.
As I have written here before, one of the unanticipated consequences of my becoming a Cyclops has been that I need all my remaining vision just to function and don’t have the excess capacity to look around and see what might be interesting still photographs.  That, combined with GANNET being small and that I have already photographed her extensively, has resulted in my seldom taking still photograph any longer during a passage.
Taking videos has the advantage of being able to capture a single frame such as the image above.
I did not realize that the lens on the stern pulpit mounted GoPro was wet and serendipitously got some atmospheric footage that I like.  While blurry I think it expresses something of the essence of the experience.
I shot the videos on four different cameras, naturally all waterproof, a Nikon AW1 and three GoPros.  My favorite of the GoPros is a Hero 5 Black, which has a touch screen that makes moving through the menus and settings easy and a linear mode that removes the curves endemic to wide GoPro views.
I have learned that on GANNET the cameras need to be in place before the action and set to start filming with the touch of one button or a voice command.  If you have ever tried to fit a GoPro into a mount, you know it is a tight fit.  It can’t be done when GANNET is bouncing around.
I had one GoPro mounted on the stern pulpit facing forward.  For a short while I had one mounted on the mast facing aft.  That mount did not stay stuck to the mast, which was unfortunate because that is a good view.
I have a mount inside the Great Cabin near the companionway facing forward, and I sometimes used a head band mount.
I just ordered a strap that is long enough to go around the mast to secure the mount there, though I don’t know how much more video I will ever take.  Perhaps just habit of always being ready.
I shot the first of the ‘end of being’ videos with the Nikon AW1.  When its battery died, I shot the second with the GoPro Hero 5 Black.  In viewing them I am impressed by how superior the GoPro footage is.
If I do shoot more video, which presumes I will sometime go sailing again, the GoPro Hero 5 Black, or a more recent model, will be my camera of choice.

I recently learned that Drascombe Luggers are currently in production in the UK.  They are being built a company with a different name than Honnor Marine, the original builder.  The base price of a Lugger is £20,000 which at current exchange rates is $26,000.
I paid about $5,000 for CHIDIOCK TICHBORNE in 1978.  An online calculator shows that $5,000 in 1978 is the equivalent of a little over $19,000 now.  So beyond inflation, the British builder has jacked up the price of a Lugger by a third.
Posted by Webb at 5:00 PM