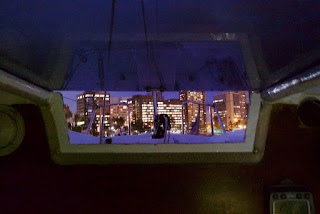 Windy and overcast here today.  Possible rain tomorrow when I have been invited to see my first live rugby match.
I should go to the foredeck and see how many push-ups I can do.  I’ve done none for months and need to get back in training.  I have a date with destiny to do 75 in little more than two months.

I took my foul weather gear with me to the shower the other day and gave it a thorough rinse, followed by drying while tied to the boom.

I’ve removed the bow sprit from the deck and stowed it below.  While at the bow I knelt down and examined at a distance of about an inch all fittings for possible leaks.  The lenses of both deck level navigation lights have wide cracks.  That is certainly one source of water coming in.  There may be others.  I never use those lights, which are only required when powering at night.
I filled the cracks with sealant and added ‘bow nav lights’ to the GANNET list.

In the ongoing tiller pilot saga, the two dead Raymarines are being repaired here under warranty.
The Pelagic did not fail as much as never quite make it to the starting line.  Brian, the man behind the Pelagic, has been most helpful, and I’m going to remove the components and carry them back to the U.S. for him to examine.  I prefer to live in hope.  I’ll report the findings here.
I also will probably buy two or three more Raymarines while in the U.S., just in case hope isn’t enough.
One reader suggested that I switch to Simrad.  I have used Simrad tiller pilots in the past, but wiring GANNET for three different systems seems excessive.

I’ve been here long enough to start thinking ahead.
I am due back in Durban on January 12.  I’ll haul and antifoul GANNET, provision, and be on my way along the South African coast, but where I’ll stop, or even if, I do not know.  I might clear South Africa from Durban.
Beyond South Africa, I will head for the Caribbean, stopping briefly at Walvis Bay, Namibia, and St. Helena, both of which I have not seen since 1988 and would like to again.
I might also stop at Fernando de Noronha, an island off Brazil.  Where I’ll pause in the southern Caribbean is undecided.
From wherever I do stop, if GANNET and I are undamaged, after a short rest, we’ll sail for Panama.
I am told that GANNET is not legal to transit the Panama Canal.  She does not have an enclosed head, and she is unsuited to transit the canal for other reasons.  I have no way to feed four line handlers and an advisor; no where for them to sleep; GANNET can’t make the required speed under power; and her deck cleats are far too small for the lines thrown to yachts in the locks.  Perhaps all of these can be overcome by money and reason.
I am not opposed to hauling the little boat from the water and trucking her to the Pacific.
If we make it across the Isthmus one way or the other, we’ll probably sail directly for San Diego, which will involve a beat to windward for the last thousand miles.
The sailing distance from Durban to San Diego is about 9,000 miles, the same as the distance we covered this year in four months.
We could be in San Diego by June 1.
I have considered sailing out to Hawaii.
We would complete a circumnavigation upon reaching Hilo, from where I could sail to Seattle and make my way along the coast to San Diego.  Or I could turn south for Opua. 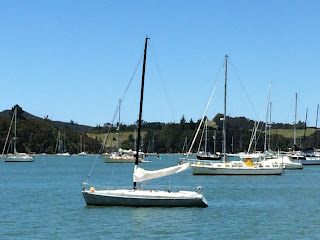 This photo was just sent to me by Mark, for which I thank him.

It fills me with nostalgia.  Those green hills are engraved in my soul.
If I can’t get GANNET through Panama, I’ll sail to the U.S. east coast and maybe across to Ireland and Scotland on a pilgrimage to Islay to enjoy my favorite liquid at the source.
———