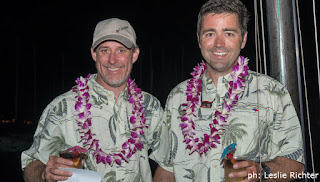 Above you see Mark English and Ian Rogers.
While I was crossing the Indian Ocean in GANNET, they were using another Moore 24, MAS!, as the boats were intended to be used:  to go fast.
In the Pacific Cup race from San Francisco to Hawaii they went very fast indeed, covering more than 2,000 miles in ten days, fourteen hours and thirty minutes.  They won; but that pales beside their sailing a race for the ages.  If not perfect, and it may have been, then inhumanly close.
If you have read the passage log of GANNET from Darwin to Durban, you know that I have said that GANNET is capable of 200 mile days, but she won’t do them unless I am willing to hand steer more than I care to.
Mark and Ian did hand steer; and every day after the first two, when they were breaking clear of the coastal weather, was a two hundred mile day.  Mark tells me that their best twenty-four hour run was 240 miles.  That is a ten knot average.  Their highest speed was around fifteen knots.
If you have ever made an ocean passage, you know that the key to making a good average is not so much going fast as avoiding going slow.  Obviously Mark and Ian never went slow.
Standing watch and watch is tiring, but they kept MAS! moving to the end.
I think I can imagine what it was like, and maybe someday, sometime I will push GANNET as hard as I can for as long as I can.  I am filled with admiration for what Mark and Ian have done.
You can read more here.
In one account of the race I found their boat described as a “humble Moore 24”.  I think not.  Small, unquestionably, but is a Stradivarius violin humble just because it is not as big as a double bass?
I’ve said it before, the Moore 24 is a masterpiece.  What other forty year old design simultaneously blasts across the Pacific and goes six thousand miles across the Indian Ocean?
In preparing for the race Mark made substantial modifications to MAS! and I inherited his old carbon fiber tiller, so he had part in both passages; and I am honored to have a part of MAS!.