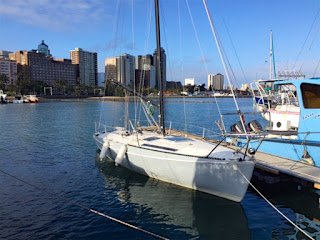 My last evening on GANNET this year.
A tumbler of boxed red wine at hand.  Spanish music, which I also listened to last night, coming from the Megabooms.
I put a second coat of Deks Olje on the wood today.  The cabin is transformed from the tidal pool it was a few weeks ago.
I’ve been aboard now for almost seven months, the longest I have lived on board continuously, slightly longer than I did two years ago, and the longest I have been away from Carol.  Too long.
When I arrived in Durban some congratulatory emails told me to get a hotel room and relax, but I stayed with the little boat.  The first night I slept in a moist sleeping bag on a pipe berth, but by the second I had restored some order and slept forward on the v-berth.  I have two homes:  GANNET and where Carol is.
As regular readers will know I’ve been largely packed for a while, and today, in addition to oiling, had only to tie down the tiller, lower the flags, and set up the running backstays.  None of which would have mattered if I hadn't done them.
16,000 miles along the way GANNET is, as far as I can tell without hauling her from the water, in good shape.
Two of the main projects I wanted done before sailing on have been completed.  The sails have had minor repairs and the main a fourth reef sewn in.  My tiller pilots have been returned repaired under warranty.  At the moment I have three working Raymarines on board.
GANNET also has new mainsail and tiller covers.
Two other projects will be completed in my absence.  The spray hood made.  And, Gavin and Derrick, riggers, will install the replacement masthead wind units, brackets to prevent the Tides Marine track from bulging when the mainsail is reefed, and cleats on either side of the mast to secure the reef tack line.
When I return in January I will haul and antifoul, touch up the rub rails and the interior, and probably give the deck a new coat of non-skid.
There are a good many items to buy in the U.S. and bring back with me, including an as yet undetermined number of additional Raymarine tiller pilots. Hopefully I will also bring back a functioning Pelagic pilot.
But for now I’m gone.
The next entry will be from the flatlands sometime after October 9.
I won’t be answering email until then either.
The next two weeks are for Carol and me. 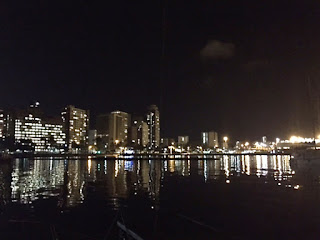 Tim sent me a link to surfline, a site I did not know.
He wrote:  While you were sailing, I used this website to see what the wave height was in the Indian Ocean. There was a stretch for more than 2 weeks that your path was in the red, meaning 20+ feet or more.
The waves in the gale I had on my approach to Durban were forecast also to be 6 meters/20’.
I did not think the waves were that high in either place, but they were certainly high enough to throw GANNET around, and I may have to revise my estimates.

I gave a talk at the Point Yacht Club a couple of weeks ago, only the second I’ve given in perhaps ten years, and I’ll conclude this as I concluded then:  I raise my glass to you and to me, and to our dreams, and the passion to pursue them.
(Passion from a seventy-four year old:  absurd!)