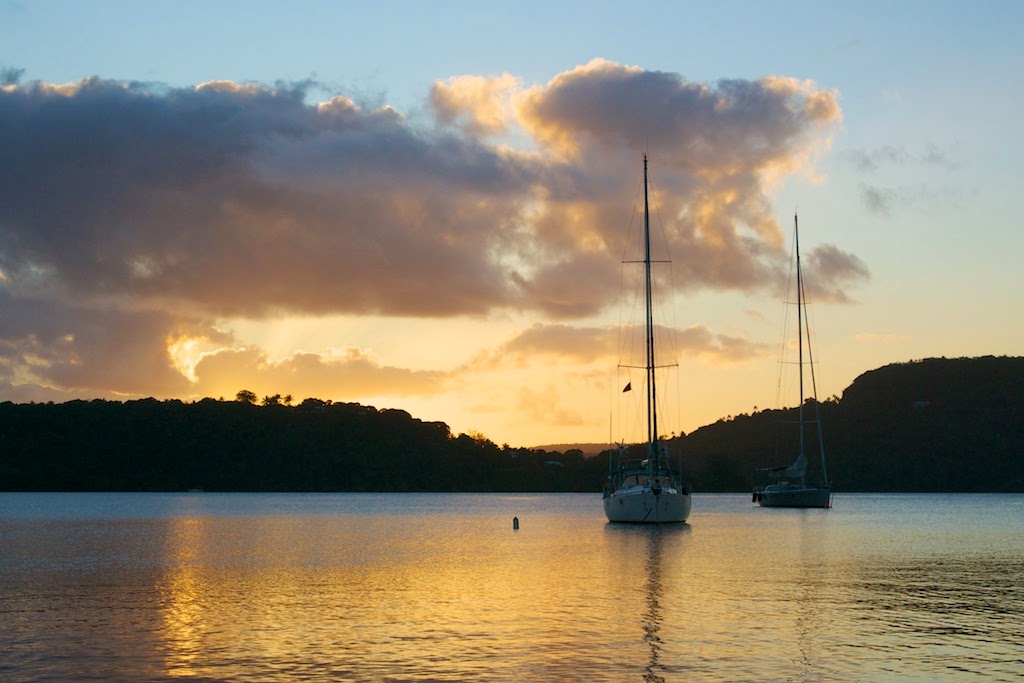 When I set my eyeglasses on the counter beside me at Central this morning the left temple piece fell off.  The top half of the screw had rusted away.  I dug out contact cement and glued and duct taped it back together.  However I just noticed that the top of the screw on the other side is also missing, so I’ll glue and duct tape that later this afternoon.
A couple of weeks ago while sorting out a solar panel problem I broke the temple piece on another pair of glasses at a point where it can’t be glued.  It’s duct taped.
I still have sunglasses with my current distance prescription in sturdy plastic Bolle frames and an old pair of multi-focus glasses that I can use, so I won’t quite be stumbling my way Mr. Magoo(lash) to New Zealand.
This does bring up the question of how many spares are enough.  Four-fifths of the way across the Pacific, four seems a likely number for some items.
I’ve broken two of four pair of eyeglasses; three of four tiller pilots—one resurrected by Rich; lost three of four baseball caps; and had two of three Apple Lightning connectors destroyed:  one by falling into bilge water, the other by my sitting on it while it was connected.
One solar panel has failed; another seems likely to.  The asymmetrical failed due to the sailmaker’s incompetence, but is fine since being repaired in Honolulu.  A few eneloop batteries fell into the bilge at various times and were discarded.   A lot of what were harbor clothes are now passage clothes.  Two Dartington crystal glasses have broken—this due to my changing where and how they were stowed.  I should have left them alone.  I discovered that the second was cracked on my arrival here in Neiafu.  I have one small glass left, but my Laphroaig upon reaching the Quarantine Dock in Opua will probably be drunk from plastic.
Several other objects have fallen or been washed overboard:  a LuminAid light; two plastic measuring cups used as piss pots; two pair of boat shoes—actually only one and a half pair, but I sent the other half to seek its mate; and the outside transponder for my weather station.  It was attached to the underside of the mainsheet traveler bridge.  Several days ago I noticed that I was getting no readings and thought the battery had died.  It probably has.  The unit is missing and presumed drowned.  Two of three small flashlights have been lost or failed, as have three of four headlamps. USB and other electronic cables still work, but are showing signs of rust.
I’m sure there is more that I’m not recalling.
GANNET has sustained no significant damage, but there certainly has been attrition.

I expect to be ready to sail for New Zealand by September 15, which is a week from next Monday.  I will not sail that day if the weather is particularly unsatisfactory; but I will be ready.
To that end I took a food inventory.
I have enough oatmeal, trail mix and dried fruit, though I will probably by another bag or two of oatmeal for peace of mind.  I also have boxes of fruit juice that I’ve been saving; and Starbuck’s instant coffee.
I have more than enough cans of chicken, tuna and salmon for lunches, and I will buy cheese just before I sail for the first three lunches.
I still have more than 130 freeze dry meals on board.
So I’m already pretty much set.
I do need to buy cabin/breakfast crackers for lunches.  There is no exact American equivalent for these, which are heavier and thicker than U.S. crackers.  They are common in the South Pacific and I like them.
I’ll buy another jar of Nescafe instant coffee.  Several cans of Chinese roasted peanuts, which I like very much.  Some boxes of Arnott’s Shapes, which are sort of like Cheese-Its.  Ten or twelve cans of beer.  A box or two of Mystic Ridge wine, a New Zealand brand I found here and is drinkable.  A bottle of South Seas rum.  Two or three Cadbury chocolate bars.  Paper towels—I finally found  satisfactory ones.  I have toilet paper and Kleenex.  Fill the water jerry cans.  And have my laundry done.
Odd to think that in a couple of months I’ll be back in a Chicago winter.
Good to know that in a couple of months I’ll be back with Carol.

I know that I said that sunsets are too easy.  I could take a photo like the one above from GANNET most evenings here and sometimes I can’t resist posting one.
While sitting on the deck earlier last evening sipping vintage Mystic Ridge boxed “Dry White Wine” not served “Lightly Chilled” as recommended on the box for connoisseurs, and listening to music, I glanced over the side and noticed a startling change in the swarm of fish beside GANNET.  In only a few days a few are twice the size of the others.  Still only filaments; but decidedly bigger filaments.  I was reminded of the one piglet climbing into the slop bucket.  Unfortunately life rewards the aggressive and pushy.
All those of us now living are here because our ancestors were the most aggressive and pushy.