I rewired the solar panels running each separately to bus bars from which a single wire continues to the solar regulator, eliminating many connections that disconnected while underway and making it easy to know which wires run to which panels, as long as I don’t forget my system.  Obviously I should have done it this way to begin with and don’t know why I didn’t.
In the process I tested each panel and found that a second one has died.  I have seen the corrosion for some time and expected it to. 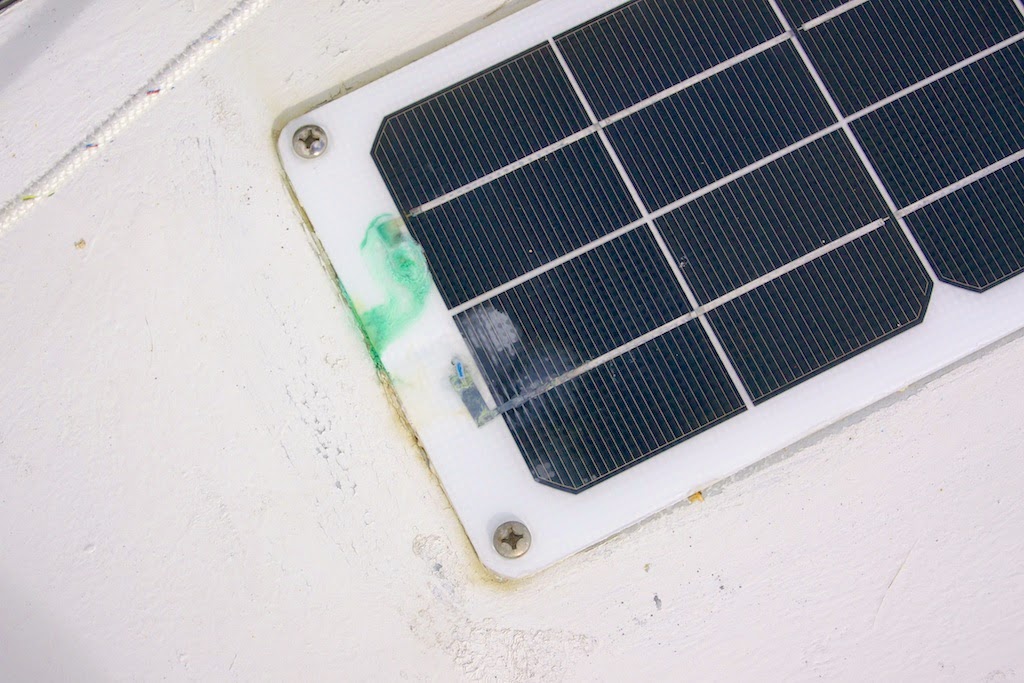 The panels have a ten year warranty, prorated after the first two years.  I’m not sure I’m going to bother.  In addition to screws at the corners, I used sealant on them, and removing them without further damage may be difficult, as would packing and shipping them back.  We’ll see.
If I just write them off as I have the tiller pilots, I will probably buy Aurinco replacements despite the one-third failure rate.  That they are unobtrusive counts for a lot on GANNET.  For aesthetic reasons I do not want panels mounted on platforms or rails above the deck.
GANNET is also not going to have a dodger or a self-steering vane.
Yesterday I managed to get a screw back in the port pipe berth pipe that came adrift at sea.
Tomorrow the new floorboards should be ready
And I’ve made my reservation to fly back to the U.S. on November 4, returning to New Zealand on March 17.
Can’t miss a Chicago winter.

GANNET is just outside the marina breakwater dock, the northern end of which is the Quarantine Dock.  Every time I stick my head out the companionway I glance over to see if Steve and ROVER OF TACOMA have arrived.  They haven’t.
I don’t even know if he left when he planned to or decided to stop at Minerva Reef.
If he did leave later the day I did, his boat is heavy and much slower than GANNET.  The storm would have caught him probably two or three hundred miles offshore and pushed him back even farther when he hove to or ran before it, the only real options in fifty to sixty knot headwinds; and after the low moved east, the wind behind it has been light.
Anyway he isn’t here and another low, though not so severe, is moving over us tonight.
I’ll keep glancing at the Q Dock

Yesterday I sent a manual position showing if you zoom in far enough GANNET’s present location on the mooring.  You can view that map here.

I thank Jay for advising me that all the dates in the Neiafu to Opua passage log were wrong.  I think I’ve got them right now.
Posted by Webb at 10:55 PM