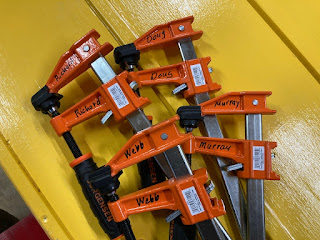 Kent and Audrey of Armada fame like to name things.  Just naming all the boats in their fleet would have exhausted those less imaginative, but they also name vehicles, even including I think carts and probably trailers and now I learn they even name clamps.  As you can see I have been so honored and I am pleased, even though among those above I am the odd man out.  The others either have their own fleets or are skilled boat builders or both.  I thank Kent and Audrey.  Now if anyone ever says to me, “Webb, get a grip!” I can reply, “I already have.”

I thank Tim for recommending that I watch the Netflix film, DON’T LOOK UP.  Briefly the film is about two astronomers who try to warn humanity that an approaching comet is going to hit the Earth and destroy the planet.  It stars Leonardo DiCaprio, Jennifer Lawrence, Kate Blanchett, and Meryl Streep, among others.  It is a satire.  It is mean to be funny and it is.  But it is also an indictment of modern society because it is tragically accurate about social media, television talking heads, politicians, gurus and some businessmen, about power and wealth coming by having no principles beyond self-interest and playing to the biggest possible audience.

If you watch—and I strongly second Tim’s recommendation—don’t miss the sequence that plays out over the end credits.

By happy chance James sent me a link this morning to a news item that an asteroid is going to pass close to Earth next week.  Perhaps you had better watch DON’T LOOK UP soon.

In THE ASSASSIN’S CLOAK from entries for January 9:

I am leading an heatless life.  A coil has failed on the unit in the attic.  This is not life threatening in Hilton Head’s climate, but it is mildly irritating because we spend thousands of dollars a little more than a year ago having a new system installed and because the wrong part was delivered.  This was supposed to have been fixed several days ago.  Lows the past two nights have been 38ºF/3ºC.  I am using a sleeping bag as an extra blanket and am quite comfortable at night.  In the morning I turn on the electric fireplace which emits some heat.

When I wrote to a friend about this, autocorrect changed ‘heatless life’ to ‘heartless life.’  I did change it back, but who am I to argue with an algorithm?