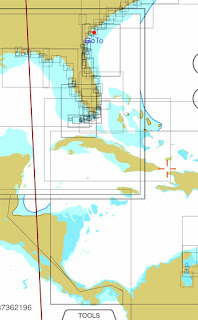 The Windward Passage is between the east end of Cuba and the west coast of Haiti.  Sailors will also know it as the name of a seminal 73’ Alan Gurney designed sailboat.
I have sailed past the Windward Passage several times on my way from the Caribbean to Florida—I think three, but I lose track.
I think it was Michael who first suggested that I should sail through it on my way next January from Hilton Head to Panama.  He is quite right.
In 1990 Jill and I sailed from Key West to Panama and went around the west end of Cuba through the Yucatan Passage.  From the Florida Keys that makes sense.  But from Hilton Head I will sail southeast outside of the Bahamas and then turn south into the Windward Passage and then southwest for Panama.
The advantages are obvious and multiple.  Sea room.  Not having to sail against the Gulf Stream.  Encountering much less shipping than in the Florida Straits.  Avoiding numerous offshore islets and reefs along the coast of Honduras and Guatemala.  And, once through the Windward Passage, a much better wind angle for Panama.
The distances are difficult to measure precisely on my electronic charts, but they seem to be nearly the same:  1600 miles from Hilton Head to Cristobal, Panama, either way.
The red dot in the image above is just off Hilton Head Island.  The cross hairs, the Windward Passage.
Not a voyage for the hurricane season, but I wish I were sailing it now.

I'm about to give up my driver's license.  It expires this year.  I hardly ever drive and don't need to.  While it is legal to drive with only one eye, I am not comfortable doing so and fear that I may cause an accident or injure someone coming from my blind side.  It was such a big deal to get that first license sixty years ago.  Not a big deal to get rid of the last, but nevertheless a milestone of sorts.

For whatever reason the thought passed through my mind this afternoon that it is time the masses were again enslaved, but then I realized they already are.
Posted by Webb at 10:01 PM