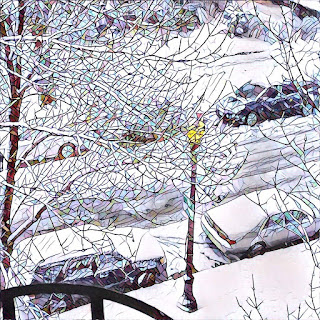 No one has ever lived in Chicago for the climate.
That it is December and cold is no surprise.
The temperature outside this morning was 17ºF/-8C when I decided to go for a walk.  I had to.  I was out of both Botanist and Laphroaig, and I needed the exercise.  Yesterday another chunk of me was whittled away and I can’t workout until the stitches are removed in two weeks.  This one was a basal cell, bringing my total of basal cell and squamous to two each.  And counting.  Unfortunately.  They are coming with greater frequency.
My watch tells me that Whole Foods is farther away than I thought.  I walked 1.98 miles to and from, including going across the street from Whole Foods to buy the Laphroaig at a Jewel supermarket.
For those of you with enough sense to live in a place where it does not freeze and are curious about what it is like where it does, if there is not too much wind and you have on enough layers of clothes, 17F is not bad.  Single digits, 0 to10F/-18 to -12C, hurt.  We will be there tomorrow.  But I’m set.
The Botanist was nicely chilled by the time I got home.

The above image was created by Prisma, Apple’s App of the Year.  Prisma is free, so I downloaded and have experimented with it.
Here is the original photo. 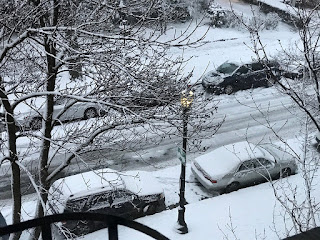 From James comes a link to an article about the highest wave ever recorded by a buoy.  I thank him.
62.3’/19 meters is certainly a big wave, but two things impress me:  first that the record isn’t higher and second that it occurred in wind of only 43.8 knots.  I conclude that two or more waves got briefly on top of one another.
Elsewhere in the article you will find mention of a wave 95.03’/29.05 meters ‘measured by ship observation’.  I am skeptical of observations made from a ship under those conditions.

I am not routinely using iNavX, my chartplotting app, these days, but for some reason I opened it Sunday on my new iPhone—I bought a 7 Plus for the waterproofing and improved camera—and found all my charts had disappeared.  Again.  For the third time in two months.
It can be said that I was not pleased.  It cannot be said how not pleased I was.  Words fail.
And I was even more not pleased when the website of the provider of the charts, Fugawi, would not load.  And even even more not pleased when I discovered that the charts had also disappeared from my iPhone 6 and my iPad mini.
I sent emails to Andre, with whom I am unfortunately on a first name basis, at Fugawi support and another to iNavX.
Eventually I was able to recover the charts on all devices by shutting them down, restarting, and finally logging into my Fugawi account.
This was not the way I wanted to spend my evening, and it came at the end of what was not a good day for a number of other reasons.  They happen.
I sent second emails to Andre and iNavX informing them that I again had the charts.
I think they disappeared this time following an iNavX update, so I turned off automatic updates, which I do when I’m not at home anyway and have limited Internet data.  I don’t need any enhancements and will be content if I can just keep the app and charts functioning until Apple comes up with a new OS and everything probably gets screwed up again.
On Monday I received an email from Andre, advising me to do what I had already done and turn off automatic updates, and I received a very honest email from someone named Jim at iNavX support.  He admitted there have been problems, said the new owners are working to solve them, and asked that I give them a chance to put things right.
It was a superior support response.  I will give them a chance and I hope they do get things right.
The email was the first I had heard about iNavX changing ownership.
Posted by Webb at 3:01 PM