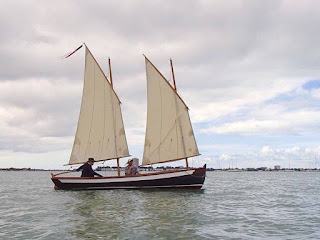 The very pretty little boat above is a Penobscot 17.

Kent writes:  ‘Audrey misses BARBASHELA so I bought her a Penobscot 17.  Name pending.’
I have written before of BARBASHELA, the 20’ long rowing boat Kent and Audrey reconstructed for a museum.  Here and here.
I do like small boats and wish Kent and Audrey great pleasure with this one.

I thank James for bringing to my attention that I have unsuspectingly been drinking Japanese whisky.  (I know there are two spellings but couldn't remember which countries use which.  A site, whiskyforeveryone, which does not happen to be a sentiment I share, says:  The spelling whisky is generally used for whiskies distilled in Scotland, Canada, Australia, Japan and Europe, while whiskey is used for the spirits distilled in Ireland and America.)
Laphroaig has belonged to the Japanese brewer and distiller, Suntory, since 2014.
I’ve had Suntory whisky a couple of times.  I seem to recall that it wasn’t bad, but it didn’t leave a distinct impression.
Suntory’s ownership may explain the rash of variations of Laphroaig that have recently appeared in an apparent effort to reach a wider audience and that Laphroaig no longer bottles 18 year old, which has been replaced by 15 year old.  Three years quicker to market.
I occasionally bought 18 year old Laphroaig.  Carol prefers it.  Unquestionably 18 year was smoother than 10, but I think it had less character.
I will try the 15.
I will never forgive Suntory if they screw up my favorite liquid.

I have spent some time recently comparing iNavX and iSailor.  I even bought some charts for iSailor, which comes with just one general world chart.
Buying charts from iSailor is a simple in-app purchase, requiring on my iPhone only a touch of one finger on the finger print reader, before the charts downloaded instantly.
Some charts can be bought in-app with iNavX, but not the Navionics charts I use.  I’ve written about problems I’ve recently had with charts disappearing.
iNavX normally costs $50.  At the moment it is on ‘holiday season sale’ for $20.
iSailor is free.
iSailor makes its profits on charts.
If you only sail one region, you will probably be ahead with iSailor.  But I checked what charts would cost to cover next year’s course from Durban to San Diego.
With iNavX I need three regions, costing a total of $85.
With iSailor I need five folios, costing a total of $185, and even then would have some sea areas in the Caribbean and Pacific Oceans not covered except on the world chart.
iNavX chart updates are free only for one year.  Thus far iSailor updates are provided free indefinitely.
iSailor has an Apple Watch app that is installed automatically on the watch when you download iSailor to your phone.  It displays several pages of information.  The first shows latitude and longitude, SOG and COG, making the watch into a useful navigation tool.  Before discovering this, I was uncertain whether I would take my Apple Watch back to GANNET.  Now I will.
The iSailor folio I bought covers the east coast of Africa, including Durban to Cape Town.  Were I going to stop at Walvis Bay, Namibia, I’d need a sixth iSailor folio, bringing the total to $220.  All of Africa is included in one Navionics region.
I’ll use both iSailor and iNavX when I return to GANNET and may have more thoughts.
Because I am familiar with iNavX and because of overall costs, I expect it will remain my chart plotting app, despite the vanishing chart hassles.  However, if I just sailed in waters covered by one iSailor folio, it might well be my choice.
If you are interested in iNavX, the holiday sale will presumably end soon.

We are having a heat wave:  it is above freezing.  Just.  34F/1C.
Two nights ago the official low was -13F/-25C.
By the time I walked a mile and a half at noon the next day to have lunch with a friend, it was a balmy +10F/-12C.
Not able to workout until stitches are removed next week, I’ve been walking everyday, no matter the temperature. 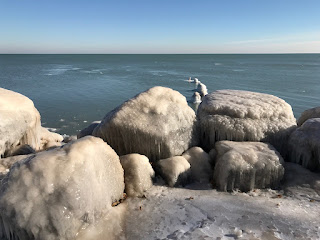 I took this photo yesterday when it was around 23F/-5C.  Spray from waves had splashed onto the rocks and turned to ice.
And here are a couple of Prisma variations.
I could say that I’m not going to bore you with more of these, but I probably will. 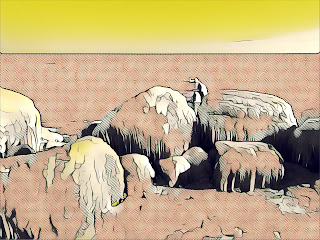 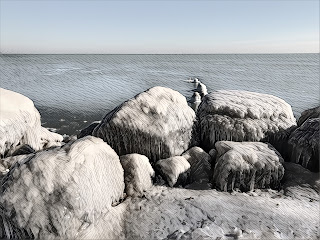