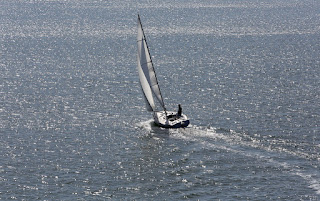 I have received envious emails about my frequent references to Opua’s recent San Diego-like weather.
Opua’s climate is more middle-California than southern.  Southern California is, after all, a desert, however pleasant near the coast.  New Zealand and Opua get ample rain and are green, more like San Luis Obispo and Monterey.
Envy can be temporarily assuaged.  A minor front is approaching with 25 knot wind and rain.
Perfection may resume Sunday.

When I went to Cater’s Marine yesterday, my new Lifeline AGM batteries were there.  I paid for them, but with 18 to 20 knots of wind the harbor was too rough to row the batteries back and get them on board.
The wind died during the night and this morning, after a single cup of coffee, I rowed ashore in a flat calm and near slack water and fetched the batteries when Cater’s opened at 8 a.m.
No problem getting them back, getting them on board, and getting them installed.  That I was replacing identical batteries helped.
On all boats, but especially GANNET, sailors often have to do things from awkward and undesirable positions.  Today there was a point where scrunched over I had to lift each battery one-handed with my left hand.  My left shoulder is the torn one.  The batteries weigh fifty-five pounds/twenty-five kilos each.  I considered the situation for a while.  There was no other way.  I lifted, reached forward and lowered.  No pain.
Sometimes things don’t go wrong.  Most of the time they go right.

I have been told that my freeze dry order is being shipped today, which is Friday, April 1, as I just noticed, in this part of the world, and should be here probably Tuesday.  Once the meals are sorted and stowed in double trash bags, thirty to a bag, my to-do list will be down to three items, none essential, with a month to go.

Brian has offered me a ride.  I thank him and, when and if the occasion arrises, hope to accept.
This is in reference to the entry of March 14.
Carol wouldn’t even have to come all this way herself, though she might like to see New Zealand again.  She could just mail me.

Jay sent me a link to a long article about ‘wave pilots’, an almost lost navigation skill in the Marshall Islands, which also has some interesting information about how GPS is affecting our brains.
I found the article well worth the time and thank Jay for the link.

I happened across the photo when looking for some at a journalist’s request.  One of my favorites of GANNET, It was taken by Steve Earley in San Diego.
Posted by Webb at 10:38 PM