I have had the Kindle edition of 26 STORIES by Machado de Assis on my iPad Mini, which is my primary e-book reader, for a long time I suppose because I did not know who Machado de Assis was.  My ignorance.  My loss.  I finally got around to reading it and was barely into the book before I came upon ‘The Alienist’, by far the longest of the stories included, when I realized I was in the presence of an exceptional writer.  I did some research which revealed that de Assis is considered the greatest Brazilian writer of the Nineteenth Century.  I immediately bought two of what are reputed to be his three best novels.  The third is not available in English in a Kindle edition.  I will probably end up buying  a paperback copy.

De Assis is original, ironic, widely self-educated, and writes with clarity.  His paternal grandparents were slaves.  His mother a washer woman.  He made his own way from age seventeen.

The stories are mostly set in Rio de Janeiro and vary widely.  One is about a man who takes part in a Brazilian civil war to kill the estranged husband of a woman he is in love with so he can marry her.  One about a man who learns the language of spiders and creates a society among them based on the Venetian Republic.  Another about The Devil founding his own religion on Earth.  One, advice from a father to his son on how to become a bigwig.

All are good.  ‘The Alienist’ is a masterpiece.

‘Alienist’ was an early name for a psychiatrist.

In a town west of Rio an alienist convinces the officials to let him establish a lunatic asylum.  I know the tern is politically incorrect now, but that’s what they called it then.  As the story develops, the definition of who is and is not insane is turned tipsy-turvy.  Not wanting to spoil it for you, I say no more.

Coming across a writer as good as Machado de Assis is one of life’s greatest pleasures.

Everyone in the United States is aware than unusual Arctic cold is sagging over more than half this country.  Starting Friday Hilton Head Island will have lows below freezing for five consecutive days.  On Saturday the low will be around 20F/-6.6C and the wind chill 9F/-13C.  This is by far the coldest it has been here since we bought this condo five years ago.  The normal December temperatures on Hilton Head are highs of 62F/17C and lows of 42F/5.5F.  It has been cloudy, rainy and raw here for several days.  Planned tennis for Carol has been cancelled three days in a row.  Everyone is complaining about the weather, including us.  We have, of course, all become wimps.  Carol checked the weather for Lake Forest.  Tomorrow the high will be 0F and the low -8F.  Wind chill will be -23 to -34.

I donate to the Netherland’s Bach Society and just received from them a Christmas gift which I would like to share with you.

A few days ago I came across a somewhat different view of Christmas in a poem written by Thomas Hardy six years after what was then still known as The Great War. 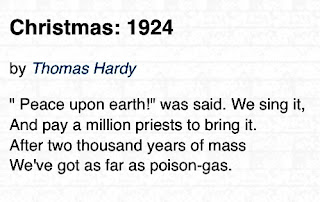 Webb, Happy Holidays and Happy New Year to you and Carol. You have, indeed ,enriched my life. Thank you for sharing your adventures, observations and philosophy of life through your books and your blog. I am very grateful.

Here in Los Angeles, the coastal marine forecast for Christmas Day is for a high of 74 degrees and wind WNW at 7 knots. And rain forecast for the middle of next week. We are most fortunate, although, we need a lot more rain.

Best wishes and be well,

I wish you and all who read this a happy holiday season and a splendid 2023.