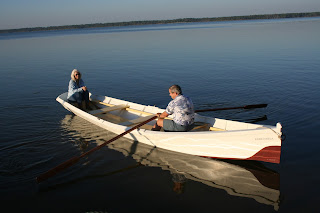 Above is the elegant BARBASHELA built by the equally elegant Kent and Audrey.  I have written of this before, but can’t locate the entry.  This was not a restoration or even a rebuild, but a reconstruction as close to possible to the original based on research, love and skill.  Kent tells me she rows as beautifully as one would expect seeing her lines.
BARBASHELA is now in the museum for which she was intended.  I hope she is taken out and rowed from time to time.
I don’t send out Christmas cards, but this photo would make a good one. 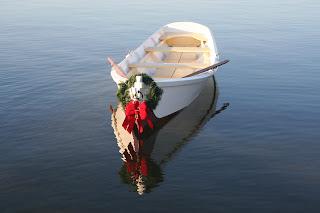 I express my admiration for what Kent and Audrey have done and my thanks for their permission to share their photos.

Bill in the UK—I know about where he lives, but am not sure if it is in England or Wales—found all the music in my requiem on YouTube and created a playlist.  I am pleased and flattered.  I thank him.
“Nova Scotia Farewell” is on twice because Bill cannot view one link and I cannot view the other, perhaps due to regional restrictions.   If you actually play the entire list, view one or the other.  Not both.  Bach is included three times intentionally.  But Ian and Sylvia are not Bach.
You can find out why I choose this music here.

Last Saturday New Zealand had a rematch with Ireland two weeks after the upset Irish victory here in Chicago.  I could not find any television broadcast of the match in the U.S.  Nor even a mention of the match before or after.  I was also unsuccessful online, though I did have a live radio feed for a while that somehow vanished into a blast of obnoxious music.
For the record New Zealand won this time 21-9.

I sailed across the Agulhas Current approaching Durban in August and will be sailing in it again next year as I continue west around the end of Africa.  Chris sent me a link to an interesting short video about recent research on the Agulhas.  I thank him.
As I watched I found myself wondering how the researchers retrieve their instruments.  I would not like to run into a big surface buoy at speed in GANNET.
Posted by Webb at 4:08 PM