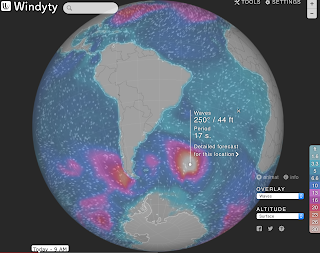 Windyty offers a lot of information.  The past few days I’ve been using the wave overlay to search for the biggest waves on the planet.
The screen shot above is from yesterday when the biggest waves were 44’/13.4 meters in a storm in the South Atlantic.  They have diminished slightly today, with a maximum of 38’/11.6 meters, about the height that both EGREGIOUS and THE HAWKE OF TUONELA were long.  The area of waves over 30’/9.1 meters is large, 500 nautical miles north/south and 400 miles east/west.  A sailboat caught in such as storm would be caught for a long, dangerous time. 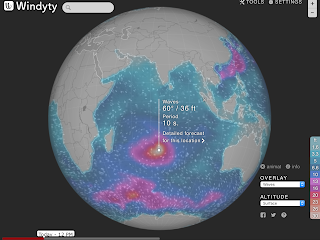 Here is a screen shot from the day before when the biggest waves were in a storm in the south Indian Ocean.  It was just such a storm that continued south and twice capsized EGREGIOUS forty years ago next month. 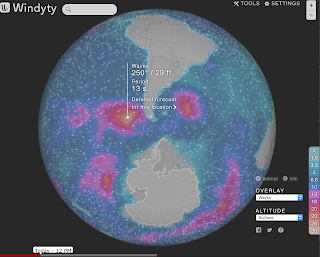 This was also taken Saturday and shows that the greatest danger in rounding Cape Horn is sometimes not off the cape itself, but to the west where the Chilean coast is a stark lee shore.  Al Hansen, the first man to round Cape Horn alone, did so from east to west and was killed when he was driven ashore in Chile.


These wave heights are of particular interest to me because I don’t claim to have ever been in waves higher than 30’.  I may have to revise my estimates upward.

My days are dominated by retyping RETURN TO THE SEA.  I’ve raised my quota to 5,000 words a day, which takes several hours, and am just over half way though with another week to go.  Between typing and appeasing my watch, I hardly had time to watch the football games yesterday.  A couple of routine medical appointments this week may slow me down.
Two readers have offered to help, one with typing and another with stripping formatting, but I am permitting myself to do minor rewriting as I type and so have to continue myself.  I am appreciative of their generous and thoughtful offers.
As some of you may remember, I have resisted rewriting earlier books, deciding to leave them as original sources true to the times they were written.  But A SINGLE WAVE is not an original source, so rewriting is acceptable.
I have long known that I am not perfect proof-reading my own writing because my mind remembers what I’ve written and sometimes sees what it expects rather than what is actually on the page or screen.  So I’m posting what I have already typed.

The link to the upload failed here.  You can find a link to the PDF here in the original journal post.

I have spell checked and proof read it through Chapter 7, but if any of you have the time and inclination to read it and to notify me of any errors, I will be grateful.
If you do so, I need to know the error, the chapter, and the first few words of the paragraph.
If you don’t have my email address, one can be found in the contact link in the navigation bar.


The upload is a PDF which should be readable on Windows as well as Macs.  Forget about the formatting.  The actual book will be in Amazon’s Kindle and in ePub which doesn’t always export perfectly to PDF.
Posted by Webb at 3:48 PM