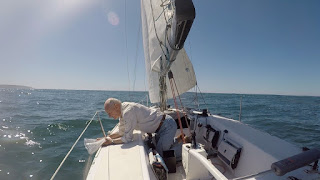 At noon about a mile off San Diego’s South Mission Beach I dispersed the remnants of my friend Louise Bleakly into the ocean as she wished.  I made a video that I will send to John, Louise’s Executor, to share with other of her friends.  I may upload it myself, but that will not be until I have a good Internet connection, possibly not until I return to Evanston three weeks today. 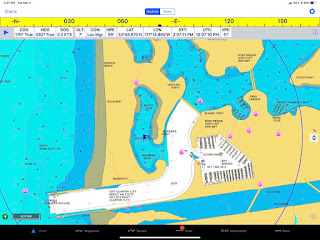 On my return to Mission Bay I have anchored in what is called Mariner’s Cove a half mile west of GANNET’s usual dock.  A slight change of scene. 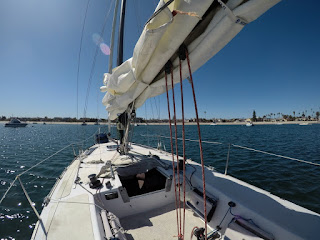 There was little wind and a leftover swell collapsing the sails or I might have stayed out and sailed.

This might be the first time I have anchored since waiting out a hurricane in the Chesapeake a year and a half ago.  I did not anchor at all last year.  Hilton Head to Panama direct.  Panama to San Diego direct.  It is pleasing to be completely surrounded by water.  I will stay overnight.

As noted here before Google notifies me when I am mentioned online.  The service is free and not completely comprehensive.

A few days ago I was told that I had been quoted on something called Ricochet.

Here is the link:

The quote isn’t exact, but close enough.  Read the comments.

I can comprehend one solo circumnavigation of the world, but 6? What did he do wrong on the previous 5? Did he “cheat” and go through the Panama and/or Suez Canals? Did he miss travelling in the Arctic or Antarctic oceans?

Bravery is not calculated. Bravery is an act of courage and has a purpose higher than self; it requires action in the face of danger. The risks always favor inaction. Bravery might even require self-sacrifice.
Is facing the risks associated with circumnavigating the earth in a sailboat an act of bravery? No. It is thrill seeking and lacks a higher purpose. Nerve and arrogance are related qualities; in this case the arrogance consists of assuming preparedness; nerve is the assumption that if perparedness fails, nerve will pull you through.
And:
I think the second quote somewhat misses the point. He’s doing something that he’s not being paid for, that is not necessary, that will not advance knowledge. I believe he is doing it for the challenge of doing it, which most people would call adventure.

Obviously I have not lived a life worth living.  You cannot say that you have not been warned that you are wasting your time here.

On a different note, my friend Michael uses quotes on the left side of his Key West Diary.  He changes these frequently.  At the moment he is using one from me:
“The truths of the sea, like the truths of the soul, cannot be reduced to numbers.”
― Webb Chiles, The Ocean Waits
Not bad.  I had forgotten those words.  But that will happen when you have been writing for all of a long misspent life.  With my usual arrogance I will include them on the deluded wit/wisdom page of my main site so they can in time be quoted and discussed in social media, which has of course always been my greatest aspiration.