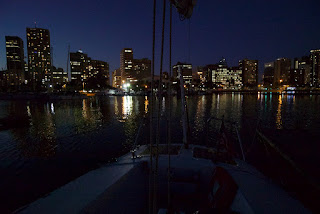 Durban Marina is in the city center.
My first night in port I sat on deck sipping Laphroaig thoughtfully provided by Niko, amazed at the contrast between the hundreds of lights and what I had been seeing for the past fifty-five days.
I drank the last of my Laphroaig Monday night while lying ahull during the gale.  I needed some solace then.

My welcome in Durban has been exceptional.  I have been offered lunch, dinner, rides to shops, places to sleep if GANNET was too wet, and my laundry done.  I accepted some but not all of these.  I slept on the pipe berth the first night, but cleared away the v-berth on Thursday and have been comfortable there ever since.
I trust that others will not mind that I note that Nico has been particularly generous with his time in helping me.
I thank all for their generous hospitality.

The daily runs from Darwin to Durban add up to 5914 miles.  These are straight line distances between noon way points.  I think I’m safe in calling it a 6,000 mile passage.
Our daily runs since leaving New Zealand total 9185 miles in less than four months.
Unless I’m forgetting something, this is in a proximate tie for my third longest passage ever.  The two longest were in EGREGIOUS.  Five months and 18,000 to 20,000 miles, San Diego to Auckland via Cape Horn; and 7,000 miles the previous year from Papeete, Tahiti, down to the Southern Ocean, where EGREGIOUS sustained rigging damage, and back to San Diego.
The tie with this passage was in RESURGAM from Whangarei, New Zealand to Punta del Este, Uruguay, via Cape Horn.

I arrived with two jerry cans of water untouched and most of the third fifteen liter container of water unused.
I used 20 gallons/75 liters of fresh water in 55 days,  which works out to .36 of a gallon/1.36 liters a day.
I also consumed other liquids.  Orange juice, tonic, club soda, wine, beer, spirits.

It was a 20.5 book passage.
Between Darwin and Durban I read the following and am halfway through Volume One of Shelby Foote’s THE CIVIL WAR.

I have had the pizza unattainable in Darwin.  It was not great.
Replenished the liquor locker, though not Laphroaig.
And had fresh strawberries on my uncooked oatmeal this morning.
Of all the pleasures of the shore, hot fresh water showers have been the most appreciated.  I was, like Lot’s wife,  a pillar of salt.

Yesterday was overcast, but Thursday and today have been good drying days.  I removed the floor boards and attacked the now dried slime I couldn’t reach under them, and I put a lot of stuff on deck, including the Jordan Drogue, which is as wet as if it had been used.
There is still more to be dried, but GANNET is again becoming her lavish, comfortable self.

Mandla, who cleans boat bottoms, cleaned GANNET’s yesterday.  I remembered him from when I was here on THE HAWKE OF TUONELA in 2008.
I asked how much he would charge to clean GANNET.  After some thought, he said tentatively, “One hundred rand.”  This is $7.00 U.S.
He cleaned the bottom yesterday afternoon.  I heard him scraping away for a half hour.  There was one gooseneck barnacle on the port bow just above the waterline, which would have been below the water during most of the passage, but there were, as I expected, many of the small volcano-like barnacles, relatives of those I scraped off when I went for a swim while becalmed early in the passage.
He came from the water shivering.
I gave him more than one hundred rand.

I am still catching up with email.
If you’ve written me, you will hear back in time unless you have been lost in the shuffle.  Gmail inexplicably archived a number of unread emails.  I think I’ve recovered them all.