Hilton Head Island: impossible; Eta; the making of a motor sailor; the way to the market 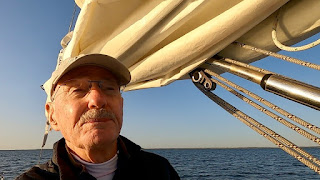 After considerable thought I have determined that it is not possible that the solitary boy living a thousand miles from the ocean he had never seen, who went to the public library and checked out biographies of great men as how-to books, could live 79 years.

The ‘impossibility’ is having a pleasantly quiet, still solitary day as befits a married monk whose wife is a thousand miles away.  Carol and I talked on the phone this morning.

A windy and intermittently rainy day, with more wind and rain to come as Eta heads our way.

I had my breakfast on the screened porch with rain falling only a few feet away.  It was like being in The Great Cabin and hearing rain on deck and seeing it through the companionway.  That is one of the best characteristics of this condo:  it is like living on a boat.  But with better plumbing.  Carol has had many successes, so I can’t call this condo her masterpiece, but she has created a wonderful space here in a beautiful location.

I am writing just after lunch of Quiche Lorraine, two pieces of which I bought at Publix the other day.  I stretched my cooking skills and heated it in the microwave.

Later this afternoon I will of course do my new age in push-ups and crunches.  Likely I will do more.  I went to 100 again on Monday.

Dinner will be cheese and salami and other treats from a gift box of delicacies Carol had sent to me.  There will probably be wine, possibly a martini, and I will likely make a rare exception to my two glass rule and have a taste of Laphroaig as well.  I will be careful.  The two glass rule is a good one.  I have demons.  Perhaps we all do.  Mine are quite understandable and predictable.  I keep them under control, but they lie in wait and sometimes with too many glasses they escape.

Some of you may recognize the photo as a frame taken from the video I made last week at anchor.

79 is not a significant number.  But if I make it another year I will become an octogenarian.  Inconceivable. 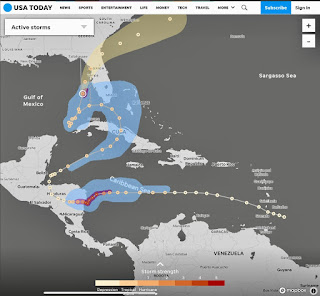 Eta is a very persistent and erratic storm.  It seems to have been wandering around forever, twisting, turning, backtracking, killing more than 150 in Central America.  Yesterday it seemed to be heading toward Kent and Audrey and their Armada near Pensacola, but now it seems heading this way.  That is fine with me.  Those along the Gulf Coast have endured enough this year and the storm is not expected to be serious when it passes Hilton Head early tomorrow.  We may get an inch or two of rain and 20-30 knots of wind.  So long as the ferry boat doesn’t pull the dock apart, we should be good. 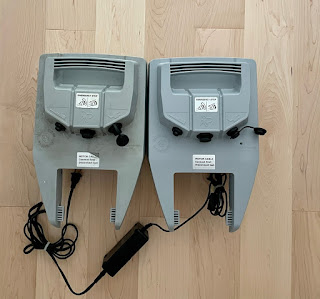 The new Torqeedo battery arrived yesterday.  I expect you can see that it is the one on the right.  I had brought the older one up to the condo to charge, not wanting to leave it charging overnight on GANNET without my being there.  GANNET is now officially a motor sailor. 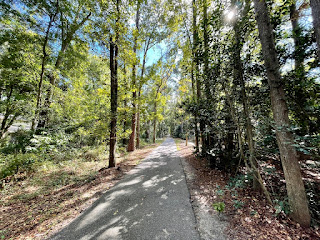 I’ve run a photo like this before and likely will again.  Taken on my bike ride to a supermarket.

It has been an impossible life, but a good one.

Why “an impossible life”? That seems odd coming from someone who’s always basically done what he wanted.

Greg Vanderboom ~ Something Else said...

Happy Birthday, hope every day is a celebration.