Hilton Head Island: sleep over; the view from the bedroom; re-piered 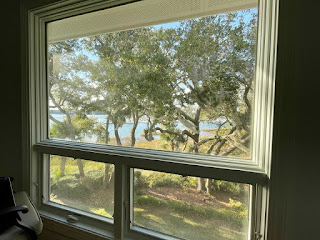 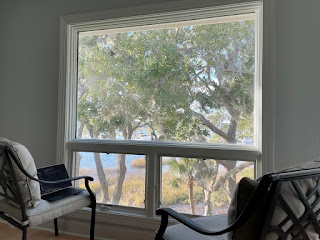 I slept on GANNET Saturday night.  She is disorganized, but the starboard side of the v-berth is still clear.  I walked down about 8:30 and was passed by no cars or people.  Old folks are not out running around at such a late hour.

The night was in the mid-40s and I pulled the light sleeping bag as a quilt over the heavier one I was in and was quite comfortable.

There was no wind and the water completely flat.  Not even a ripple.  GANNET was as quiet and motionless as if she were in a cradle ashore.

The little boat is no longer self-contained.  I have moved all but a few work clothes up to the condo.  I have little food there, other than maybe twenty freeze dry dinners.  I am down to my last three JetBoil gas canisters out of the case of twenty-four I bought before the start of GANNET’s circumnavigation.  When living on board full time a canister lasts me at least two weeks.  So I walked back to the condo for breakfast.

It was good to spend the night on board.

Above are two images of the view from our bedroom.  I am presently sitting in the chair on the right.  I can see the upper two-thirds of GANNET’s mast.  Almost high tide.  Water is reaching to the multi-trunked live oak whose branches I can touch from our deck.  I wonder how long this place will survive.  Barring a destructive hurricane, at least for my lifetime—which isn’t saying much—and I hope for Carol’s.

Of GANNET I telephoned Marine Tech last week to try to learn when the rigger will appear.  I was told they will get back to me.  They haven’t.  Sigh.

Of myself, I was partially unstitched this morning.  Only a single stitch, which had deliberately been tightened more than the others and needed to be removed earlier.  I return in a week to have the rest of the stitches removed.  I asked about exercise and was told not to do any push-ups.  I resumed my weights and resistance bands last Wednesday and am alternating them six days a week.

Kent and Audrey have piered out, repairing the damage caused by Hurricane Sally surge.  Their pier is almost the length of an American football field, 257’6”/78.5 meters and took 515 planks with six screws in each.

Photos, including one of Kent’s pocket, can be found here.