New chairs arrived yesterday and I am sitting in one of them beside the huge window, divided into three parts, in our bedroom.  The angle and perspective are different than in the living room.  I am surprised to find that I am facing west.  I would have thought south.  That the island runs NW-SE throws me off.  I can see the top of GANNET’s mast through a gap in the live oaks and palms, and a long curve of Skull Creek with a green channel marker a few hundred yards away.  Last evening I was sitting here sipping Plymouth gin.  With low overcast the sunset was not spectacular, but fifteen minutes later, Skull Creek turned a lovely deep rose that gradually faded.

The new chairs are comfortable.

I listened to Bach early today.  For the past several evenings my Bach has come from a music video of Bach played by various mostly young artists on the guitar.  Eric sent me the link for which I thank him.  I note that several of the young women are as attractive as they are talented, not I expect by chance.

If you want to listen with me:

I am rereading the poetry of the Portuguese, Fernando Pessoa.

Of his work, not surprisingly I like the poems in MESSAGE most.  They are about the sea and greatness.

I recall that I have posted these two before.  They are worth reading again. 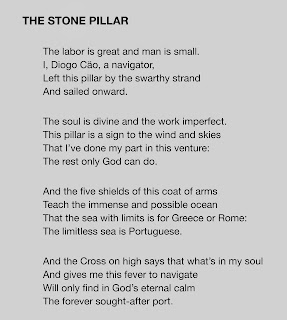 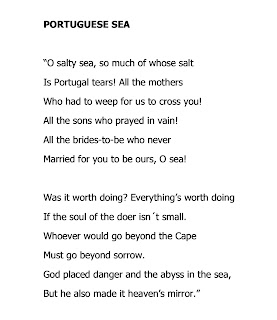 I just finished reading OUT OF THE DARK by the French novelist, Patrick Mondiano.  This was one of the books that came to my attention through BookBud.  I had not previously heard of Patrick Mondiano, although he won the Nobel Prize for Literature six years ago.  Not all books I take a chance on from BookBud turn out well.  Mercifully this one was short.  Had it not been I doubt I would have finished it.  It is not a bad book.  It is said to be about love lost.  I don’t think so.  There is some implied sex.  There is longing.  But the characters are too pallid, too disaffected, too estranged to be capable of love.  This may be a book for those who suffer from ennui and spiritual malaise.  Portugal’s sailors would not have been interested in it.  And neither am I.

Having no musical talent, I enjoy watching the hard earned dexterity of those who do.

I marveled at the fingers of the Bach guitarists.

I have long had Dupuytren’s Contracture, my only claim to being a Viking.  It has not much progressed or bothered me, until in the past year or so the little finger on my right hand has become a claw.  I first noticed this when doing push-ups.  It can be corrected, but I don’t need that finger enough to undergo surgery.  However, our recent cool spell caused me to order a pair of gloves from Amazon.  They arrived and are very nice gloves, except I can’t get my little finger in them.  A slight incision may be necessary:  in the glove, not my finger.

Thanks for sharing the Bach video link. Incredibly beautiful on so many levels! A needed boost to get through the winter.

Salt and mirror, beautifully written. Havent read a poem with so few words with such depth. Thank you for sharing it.