You may have read this past week that once again I have not won the Nobel Prize for Literature.  I’m getting used to it.  My hopes are diminishing.  I’ve never liked committees and have been surprised on the rare occasions they have given me awards.  I’ve even considered refusing to accept them, but that seems churlish and it is interesting to get a rare glimpse into other worlds.

The Nobel Prize went to an American woman, Louise Gluck, of whom I did not know.  That’s fair because I am reasonably certain she does not know of me.

I googled and found some of her poems which I liked well enough to buy a collection of her poems from 1962-2012.

Below are five related to THE ODYSSEY.  If you haven’t read it recently, Circe is an enchantress, one of the daughters of Helios, the sun, whose island Ulysses and his crew visited on their slow voyage from Troy.  She turned most of his crew into swine.  Ulysses was able to pursuade her to return them to human shape and lived with her a year.  Penelope is Ulysses’s wife. 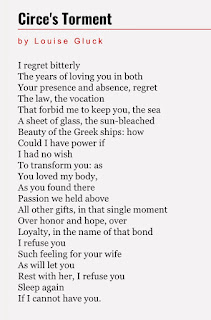 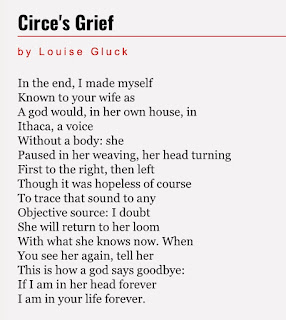 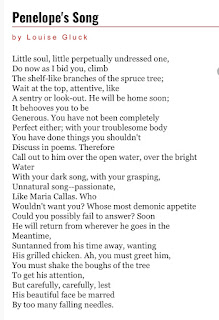 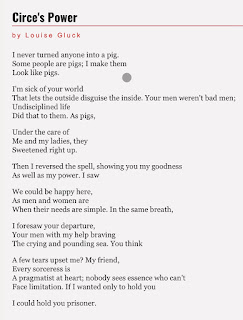 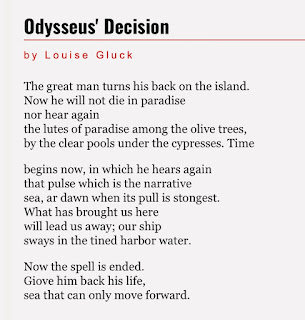 Sorry to hear you missed out on the Nobel.Maybe like Sartre you could refuse. Circle by Madeleine Miller is a good read.

Thanks for the commiseration, Geoff. You, too have been betrayed by autocomplete. CIRCE by Madeleine Miller is indeed a fine novel. I read it last year.

I think Odysseus was avoiding Penny...

;I, too, saw those, but saw beyond them to the value of the poetry.

Something went wrong and the above comment is out of sequence, It was in response to the following from Ernie:

“Poetry is hard for me.

Where did you buy this collection so I can avoid it. “

As I said above, I ignored the typos and did not find they compromised my appreciation of the poetry.