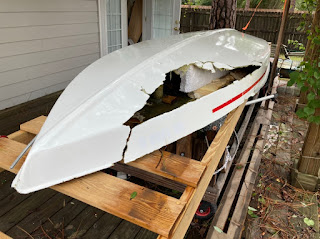 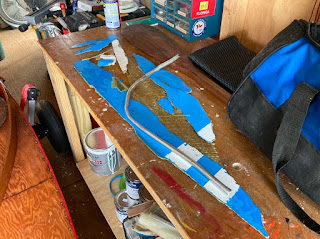 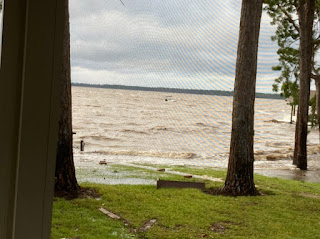 Storm Radar shows the remnants of Sally now out to sea.

In her time she dropped heavy rain on Michael and Layne and Rusty in the Florida Keys, then caused significant damage to Kent and Audrey’s Armada near Pensacola, Florida—the above photos are from Kent, passed well to the west of Hilton Head where we had only light to moderate rain and 20+ knot wind, then caused Steve Earley to pause his fall cruise on the Chesapeake for the comfort of a hotel room for a night or two.

I am sure many of you also experienced Sally, but these are the people I have heard from.

Kent and Audrey felt the full force of the storm.  Kent wrote to me:

We drove the RV 90 miles East on Monday while they tried to figure out where the storm was going, intensity, etc...Spent the night in an RV Park. Got up yesterday morning and they forecast it to go 150 miles to the West around Biloxi. So we knew we'd get a lot of rain and came back to the house. Then last night the track started changing, 90 degree turn to Alabama. We rode it out in the house, over 20 inches of rain with gusts to 57 last night. The fun began today, the storm surge got bumped up from 1-3 to 4-7 and arrived at high tide, wind driven. We got a foot of water in the garage but none in the house. The pier sustained heavy damage and 2 of Audrey's Sunfish got whacked, but we can repair those, and she has 13 more to pick from. ONKAHYE got a little water on her tires, but otherwise stayed totally dry, which she wasn't happy about..
Looks like the weather station went underwater a couple of hours before high tide.
Sharknoe is fine, but WAVE needs a new nose job. 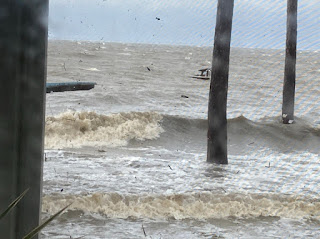 I think there should be a lawn and a pier out there somewhere.
I thank him for permission to share his email and photos and naturally am glad that he and Audrey are safe and wish the Armada full restoration.
The other day at Bed, Bath and Beyond—one of the lessor moments in an epic life—I saw a small battery or USB operated Treva fan. 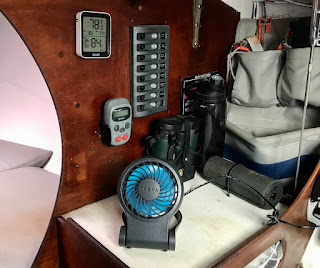 Having become disillusioned with Calframo fans, I bought one.  Thus far it is perfect on GANNET.  So much so that I just ordered another, this one from Amazon who, naturally sells them for about a third less than Bed, Bath.
This is the 5” model.  They make others, including a 10” model that might be better suited for bigger boats. 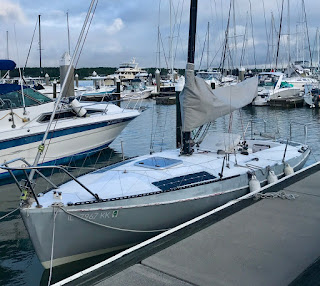 Today in the wake of Sally is pleasantly cool.  76ºF at noon.  I have just come back to the condo after preparing GANNET to be left for a month or two.  I hope never again to leave her for long.
Some problems are self-solving.  I had pretty much decided not to bend on the jib, but it was too windy yesterday anyway and there seemed no point today.
My life is less complicated that it was a week ago.  San Diego has been eliminated and the flight between Chicago and Hilton Head Island takes less than two hours.  I leave the little boat with regret tempered by the knowledge that I will be back soon.
Posted by Webb at 10:54 AM

I used to live in Destination, FL. Relieved that I did not see this coming my way.
https://www.cruisersforum.com/forums/attachment.php?attachmentid=223386&d=1600082109