Several of you have sent me links to a man trying to ‘sail’ from San Francisco to Hawaii in a, I think, 9’ boat.  Had you not I would not known of this because as noted before I don’t read much about sailing any more.  A lot of what appears about sailing is reinventing the wheel and solving problems that I solved decades ago and a lot is about eating and shopping ashore.

The very small boats average a knot or maybe two.  GANNET under bare poles does more than that, and when I was adrift in an 8’ inflatable tied to the swamped CHIDIOCK TICHBORNE we made over 300 miles in two weeks.

I just checked and this man has covered 60 miles in his first 52 hours.

I like small boats, but I have always had boats that sail well and GANNET is, of course, a joy.

If this man makes it to Hawaii it will be a feat of endurance, but it won’t be sailing.  It will be at best a controlled drift. 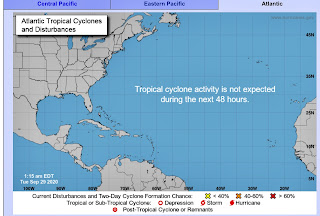 After an early active hurricane season, for almost a week at what should be the height of the season, the National Hurricane Center’s map has looked like this.  This morning there is an area of low pressure south of Jamaica with a less than 40% likelihood of development.  Very odd and very welcomed.

Fall has come to the upper flatlands, with temperatures dropping into the 50sF.  I have been spending most of the time indoors and had not caught up with this reality until yesterday when I had to bike to drop off a package at a UPS store.  I was wearing a t-shirt and shorts.  As soon as I pushed my bike out the back entrance to our building, I knew this was a mistake, but continued on.  Upon my return and after my weight workout, I showered and changed into Levis and a long sleeved shirt.
Carol went to the office yesterday.  When she came home she saw me and exclaimed with what I consider unseemly surprise, “In that shirt you look like a muscle man.”  With a sigh of resignation I replied, “I am a muscle man.”

"It will be at best a controlled drift."

That made me chuckle. With the tides we have around here, it occurs to me that you've just basically described all sailing in the Bristol Channel!