Evanston: cleaning up after Sally; the weaponization of Bach; short time 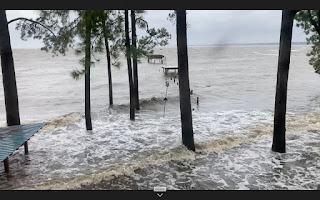 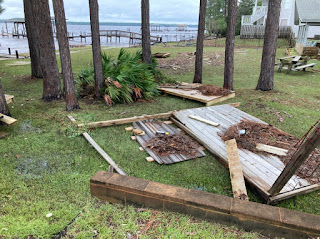 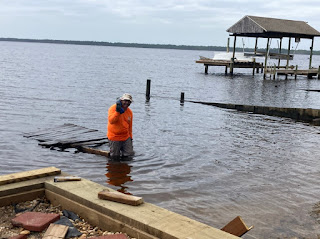 From indomitable Kent and Audrey:

Some things around here are getting back to their original habitat. I'm not sure how Sally did it but she put a lot of things in the front yard that were supposed to be in the back yard, and things in the back yard that were supposed to be in the front yard. One huge score a few days ago was we found ONKAHYE's (their Drascombe Lugger) previous floorboards, they were getting cracked so we replaced them and kept them to use to convert a boat trailer to a utility trailer from time to time. I went over to the neighbor's house to see if he had seen anything boat shaped and he said maybe, so we dug through a 6 foot pile of debris and found them. Audrey came walking up and started crying when she saw them.

We have most everything in small piles, we are dragging our feet on making the big pile out by the curb hoping that a gent who might do ours and several neighbor's dock work can haul it off soon, but my guess is we will be doing the hauling. There is about a dump truck load, of other people's pier parts and vegetative debris. And some pier pilings, stand by to see how we move those.
Let's see, a few musings.
1. We learned to not loan out our tools until we are done using them...maybe to not loan at all. Audrey has her Special Reserve that no one will ever get, her Grandma's ball peen hammer and regular claw hammer.
2. We bought a trailer and lawn mower and fired the yard crew. They came by right after the storm and offered to do cleanup, took a deposit check for half and left. Cashed the check. 4 days later we have the work done so we called and told them to mail us a refund and they are no longer needed. Audrey got a John Deere with 22 hp motor and a cup holder for her grog. She also got a matching dump trailer. And another garden cart with big tires.
3. We went and rescued the flag off the end of the pier. Long story follows. Audrey tried to take it down while I was running other pre-storm errands but it wouldn't come down. It had a small rip and needed to be replaced, and we ran out of time to get it down. The flag was shredded and tangled during the storm, but both neighbors told us afterwards that they kept looking out to the end of our pier to see if the flag was still there, even taking photos and videos. I love the flag and hate that it got shredded, and hate those videos on Weather Channel of shredded flags.
The flag flew until Sunday when I had enough and couldn't look at it any more. So I rounded up Audrey, a new flag, a folding ladder, a drill, a crowbar and the Sharknoe SCOUT and we headed out. Winds were blowing about 15, whitecaps, and surprisingly the bay water was cool, I was in the water and towed Audrey 250 feet out to the end of the pier so she could Skippervise and be an extra set of eyes while I worked on the halyard. tied SCOUT off to pier remnants I extended the 20 foot ladder and stuck it in the muck of the bay bottom, did I mention the jellyfish, both deal and live? Laid the top of the ladder against the piling that the flagpole (sunfish spar) was attached to. Went up the ladder, which was fun carrying flag, crowbar and drill, stowed that gear as best I could, undid the halyard and the flag only came down about halfway, as the shredded strips had snagged on piling hardware. I tugged enough so the stripe would finish shredding, and eventually got most of the bits of the old flag down. Part of it will be out there for a while. I hooked up the new flag, top snap shackle and raised the flag a bit to clip on the bottom shackle and found that the old flag had re-shackled itself by a few threads. Got that clear and raised the new flag, it snapped steadily the rest of the day. Gave Audrey the old flag which got tucked into her jacket, loaded the rescue equipment back onto SCOUT and mucked our way back to shore.
We will keep that flag, maybe have it framed after we recover the other remnant.
4. When buying lumber and bags of paver stone, load lumber first.
We are doing great and enjoying the workout. Over 16,000 steps per day for the last few days. Today was some pressure washing, re-landscaping and changing out a few cabinets in the garage.
Cheers
Kent and Audrey
As I said:  indomitable.
After showing five storms recently, the National Hurricane Center chart of the Atlantic is surprisingly empty this morning.  Good. 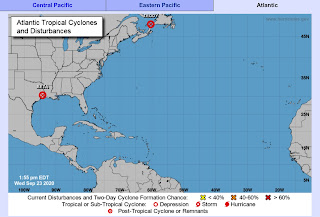 From Tim comes a link to an article about the weaponization of Bach.  As you know Bach is the soundtrack of my life, but he frightens others away.  Rap ‘Music’ would do that to me.  I prefer my end of the spectrum.
https://lareviewofbooks.org/article/bach-at-the-burger-king/
Evanston is lovely today.  76 and sunny.  It is pleasant to be here for a while, a short while.  I’ve already made my reservation to fly back to the Low Country on October 19.
I placed an order online at Binny’s, the local liquor chain store, and when I received notification that it was ready for pick-up I biked out, stopping first at a nearby Walgreens to get a flu shot, only to find that they are out of flu shots.  So I biked a mile farther to a CVS which had the vaccine.  I asked if there is a shortage and was told that there is not, but there are problems with distribution, which of course is true of most of the world’s resources.
I had noticed when I placed my order at Binny’s that my favorite liquid which recently has been $50 a bottle in Chicago and sometimes even $45 is now $65 a bottle.  I asked and was told as I expected:  Trump’s tariffs.
I am out of shape.  You probably would not think so if you saw me, but I know.  I don’t know if I can do one-foot push-ups.  I know I should start resuming whatever of my workouts I can.  Tomorrow.
Posted by Webb at 3:25 PM

Thanks for the update on Kent and Audrey. Nice work by them to persevere!