Evanston: back to boats 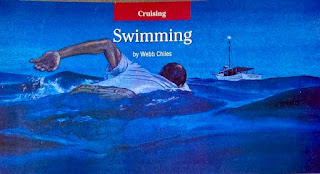 I know that many, probably most of you are only here because I sail.  I read a lot about sailing when I was teaching myself how to.  I don’t much anymore.  I have other interests and I appreciate your putting up with them.  Or perhaps you don’t and only read entries about boats. If so you will be pleased.  This entry is all about boats and the sea, most of it provided by readers.
Dan was going through boxes of old papers and opened an envelope from which fell an article of mine that appeared in CRUISING WORLD.  Above is an artist’s rendition of me making for an anchored fishing boat after twenty-six hours and about 125 miles of floating and swimming in the Gulf Stream after sinking RESURGAM, though in my memory I was wearing a yellow tee-shirt.
The article begins:  I was Socrates for nine hours, but then, as I weakened, I became Dylan Thomas for seventeen.
A slightly different version can be found on the articles page of the main site.
http://inthepresentsea.com/the_actual_site/swimming.html
That swim was a turning point in my life.  it has become easier since.
I thank Dan for sending the image.
Since I am writing about myself, permit me to continue.  Kent just reread THE OPEN BOAT:  Across the Pacific and sent me a list I included under the heading, “What Other World Cruiser.”
...has a dinghy more than half the size of the boat.
...can sit out the cyclone season in a tax assessor's back yard.
...has full standing head room for giraffes.
...can lift his mizzen with one hand.
...can take care of annual maintenance in two mornings.
...can be towed behind a minivan.
....can fit in a garage.
...can be rowed.
...has no boom.
...is named Lugger when it is actually a Gunter.
...has a bumpkin.
I had forgotten that and thank him for reminding me.  I haven’t read my books for decades.  Maybe sometime I will reread me from the beginning.
As I expect most of you know I was writing about CHIDIOCK TICHBORNE, an 18’ Drascombe Lugger.  Kent and Audrey—though probably that should be the other way around—Audrey and Kent have a sister ship, ONKAHYE, in their Armada of small boats. 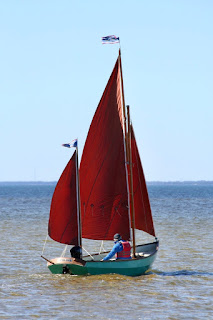 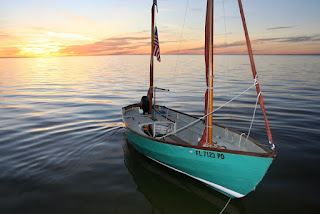 Lovely.
Their ONKAYNE is named after a mid-19th Century US Navy Schooner on which an ancestor of Audrey’s, Ben Hunter, served. 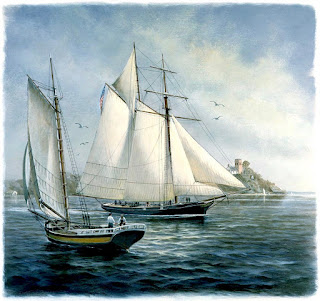 I thank Kent and Audrey for the images.
I thank Ron for the link to an entertaining and interesting four minute video of the scraping of a ship in Scotland.  To me it looks like insects devouring a carcass.

In viewing the Maritime Traffic site, I recently noticed yachts heading north from New Zealand and emailed a couple of friends there asking if restrictions have been eased.  I thank Zane and Jason for their responses.
The answer is that Fiji is opening to yachts, but with significant restrictions:

Somewhere in the fine print is listed a requirement for insurance.  I do not recall how many times I have sailed to Fiji since I first did in CHIDIOCK TICHBORNE in 1979.  Five or possibly six.  I have never had insurance.  Perhaps this is limited to inside the marina.  Perhaps the frontier is closed.  Sometimes I feel like a mountain man in the old west when the settlers came.  I am on the record as believing it desirable that no marine insurance exists.  If sailors had to go to sea totally responsible for their own lives and property, a good many who shouldn’t wouldn’t.

I discovered online that Skull Creek Marina has been sold since I sailed for Panama in late January of last year.  I subsequently learned that Marc, the office manager, and Fred, the dock master are still there.  Carol and I did not make it to the marina during our curtailed visit to Hilton Head.  We started to walk down one day but found the pier out to the marina blocked by a group of twenty or so people and on our last day it rained.  I emailed Marc and told him I plan to truck GANNET back east sometime this year and hope they will find a space for her.  I received a quick response back that indeed they would.  Very nice people at that marina.  One less problem to solve.