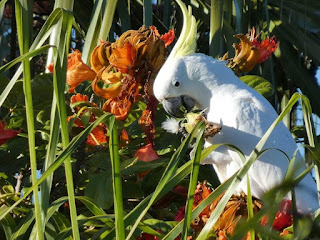 From Pat on the better side of the Equator in Queensland, Australia, come these photos taken from or near the deck of his house.  Above a Sulphur Crested Cockatoo.  Below, Little Corellas, also known Pat tells me as Blue-eyed Cockatoos.  I thank Pat for sending the photos and for permission to share them with you. 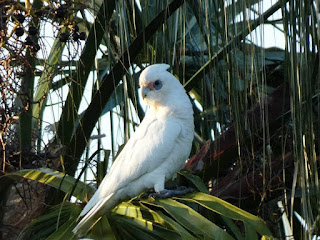 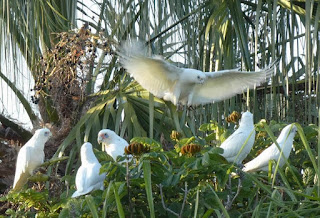 Walking through Calvary Cemetery Saturday afternoon we saw three coyote pups.  Or rather Carol did.  By the time she pointed them out to me, two had scurried back into their den beneath a long flat gravestone.  The third, about the size of a chihuahua dog, bolder or more curious remained above ground and seemed as interested in watching us as we were watching him.  We were about fifteen yards away on the main drive that bisects the cemetery and no threat.

Subsequently we have learned that coyotes in urban settings like cemeteries.  We did not see the adults, who presumably were out hunting rabbits or squirrels.

I found myself wondering whether curiosity and boldness are advantages or disadvantages in survival for a coyote pup.  Or any of us.  I can see it both ways.  He was an appealing little animal.  I wish him well.


I do not really believe the pandemic is over just because it has been pushed from the front pages by other bad news.  However, restrictions are being eased and behavior, even my own, is changing.

The road blocks preventing non-residents from entering the Florida Keys have been removed today, and South Africa is permitting liquor stores to open for the first time in two months.  They are still not allowed to be open at night or on weekends.  The fear was of an increase in domestic violence with men at home more.   Here in the United State liquor stores are considered essential businesses, along with gun shops, and have always remained open.  Surely this is a constitutional right.  Or something.  And there can not be an increase in domestic violence when the mobs have taken to the streets and no one is at home.

I am in fact just back from bicycling to the liquor store to pick up an order placed online.  They will deliver, but inspired by the coyote pup I decided to be bold and actually went into the store during their geezer hour from 10 to 11 AM.  There were only two of my peers in the supermarket-size store.  We all had on face masks as did all the employees, who outnumbered us.  We were almost out of gin and Laphroaig.  Intolerable.

The virus numbers in two or three weeks will be interesting.


I have long been on the record as believing that my luck is only average and that I am not brave.  However I am beginning to reconsider.

When last in San Diego I had lunch with an old friend who drove down from Los Angeles.  We ate at the Royal Rooster on the other side of Quivira Basin from GANNET’s dock.  The Royal Rooster was a new business.  I wonder if it has survived.

As we were enjoying the world’s best tacos, the topic of luck came up and I said that I consider mine to be average.  My friend said with raised eyebrows, “After all those voyages?”  I said matter-of-factly if immodestly, “I’m good at what I do.”  She said, “Yes, but still...” and we went on to talk of other things.  However that bit of conversation stuck in my mind.

Long time readers will know that I do not deny time and chance.  I have just thought that in my case chance has evened out.  But maybe I have been wrong.

At sea a couple of ships have come close to running me down, one close enough to break RESURGAM’s starboard spreader, but I have spent a lot of time out there and who knows how many might have come closer but for minor changes in their courses and speed and mine?  Or, despite the number of knock-downs my boats have experienced, how many other waves broke a second or two earlier or later?

I think that most experienced seafarers are fatalists because they know that no matter their strength and skill, they are dealing with forces far beyond their control.  Perhaps considering the amount of time I have spent at sea on the sometimes ragged edge, as my friend implied my survival into old age, no matter my skill, is proof of exceptional luck.

I have always acknowledged my good fortune in meeting Carol during the only brief time our lives could have come together.

And I know that my body is a great gift of the genetic lottery.  All I’ve done is ride the horse I came in on, take pretty good care of it, and get back on when I fell off.

So upon deliberation, that I have lived the life I have and become seventy-eight years old in good health, though frayed by time, and with the love of an exceptional woman, may be proof that I have been exceptionally lucky.

Who knows?  I may next decide I am brave.

Well stated and inspirational for any of us. Thank you.