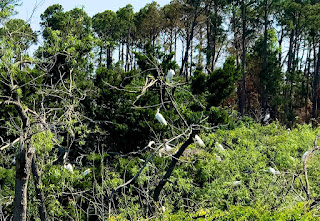 Almost 8:30 p.m.  The sun has set unspectacularly.  An overcast sky.  Limited color.  Trees and leaves almost black.  Sky shades of grey from light to dark.  Silver water.  Boats in the marina that I know are white seem gray.  A  big power boat I know is dark blue seems black.  A bird calls.
I spent the weekend up here, then struck the set this morning and went down to GANNET, where I did some minor work.  She actually doesn’t need much.  My to-do list is diminishingly small.  But it has become hot here.  Often 90+F in the Great Cabin and I have become decadent in my old age and walked  back up in the absence of workmen and minimally re-established myself.  The attraction of air-conditioning, an ice cold martini, and a fast Internet connection irresistible.
The marina has free Internet, but repeaters are not working and the signal does not reach GANNET.
So I am on land looking down on water instead of inside the Great Cabin at water level.  I can see more water here.  I am graced by having my choice of views.

The work on the condo has stalled, temporarily I trust, on fire proof plywood.
A couple of you have asked for photos of the renovation process, something I had never considered,  but will.  This whole thing is totally beyond my experience.

Yesterday Roger and Laurie, two local sailors, came by and picked up me and my bicycle and drove us to the entrance of Pinckney Island National Wildlife Refuge, where we biked for seven or eight miles though a rare paradise along gravel and grass trails.  No cars.  Only walkers and bike riders.  In places rookeries where dozens, perhaps hundreds of white egrets nesting are confetti in the trees.
The photo, taken with my iPhone does not do the spectacle justice.
Roger, who has lived here most of his life, once biked across a four foot alligator on one of these paths.  The alligator, understandably annoyed, bit his foot, but was thrown off by the bike’s rear wheel.
The Low Country is a new world to me and I continue to find unexpected beauty here.

Almost all who read this are men, but Nancy, one of the few women who do, recommended a book to me a while ago, LOST ISLAND, by James Norman Hall, who with Charles Nordhoff wrote the deservedly famed BOUNTY TRILOGY.
I have read other books by Hall, who was an Iowan who fought as a pilot in WWI and then lived in Tahiti and married a Tahitian woman who was still alive when I first sailed there in the 1970s.
LOST ISLAND was published in 1944, during WWII, and is remarkably readable, intelligent, and prescient.  The story is related by a National Guard Colonel engineer who is sent out not long after Pearl Harbor to turn a tropical atoll into a military base.  From the description I conclude it was one of the Tuamotus, the Low Archipelago, three or four hundred miles northeast of Tahiti.
I am not going to tell you more.  It is not available in Kindle.  You can but a used hard cover copy for a few dollars from Amazon.
I enjoyed the book and thoughts of it have stayed with me afterwards.
I thank Nancy for the recommendation.

Most of an hour and a martini have passed since I started writing.  When I close the display of my MacBook, darkness is broken only by the flood lamp on the seven trunked Live Oak almost within arm’s reach from our deck, a few lights to my right in the next condo development, and ahead on boats in the marina, and flashing red and green lights on buoys marking the Intracoastal channel.
The only sound something like crickets.  Perhaps it is crickets.
Posted by Webb at 8:22 PM