Mission Bay: curtain down on Act One 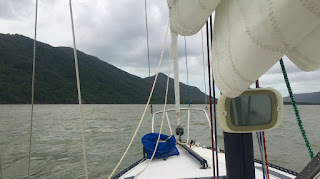 1600  I am anchored at Mission Bay.  Truly.  Some of you will recall that GANNET and I sailed from San Diego’s Mission Bay two years ago.  This one is a few miles east of Cairns, Australia, surrounded by high land over which the wind is presently gusting 28 knots.   The bay is three miles across.  I’m on the Cape Grafton side.   All the land is designated for Aboriginals, and I can see a few houses in a settlement three miles to the west.

I made an instrument landing, crossing the Great Barrier Reef in pouring rain this morning.  The rain did not end for long last night and when it resumed it has continued through the present and is forecast to rain for two more days.  I may be here a while.

I gybed the deeply furled jib at 0045 this morning.  This put me on the leeward pipe berth, but I didn’t think it would matter for a few hours.  I was wrong.  Drops that made their way around the companionway hatch began falling on me.  First I covered my head with an already wet tee-shirt.  Then I tried a cap.  Finally at 0300 I got up, put on foul weather gear and sat dozing at  Central until 0445.

After a cup of hot coffee, at first light at 0600 when we were ten miles off a waypoint I had put on the Great Barrier Reef, I unfurled more of the jib, our speed went from 3 and 4 knots to 6 and 7 and we headed in.  Breakfast was a protein bar eaten in the cockpit washed down by rain.`

The Great Barrier Reef is said to be the biggest living thing on the planet, but it is not a solid thousand mile wall.  Rather it is composed of hundreds, perhaps thousands of reefs, with many passages and channels through them.  Rather than go all the way north to the entrance of the Grafton Passage and then sail back southwest, I found a way in from due east of Cape Grafton.  In fair weather it would be easy.  In heavy rain, strong wind and poor visibility, it was not.  I wouldn’t have tried without GPS and my iPhone as chartplotter, though I discovered that when the waterproof case I have the iPhone in is wet, the screen does not respond to touch.  I went though a lot of paper towels stuffed in my foul weather gear pockets before I moved it below and stood watch in the companionway, despite some rain getting below.  The cabin was already wet.

I put waypoints on reefs and in the middle of the channels.  We sailed south of Baines Patches, Milln Reef and Thetford Reef.  North of Northwest Reef, Pellowe Reef and Moore Reef.  I didn’t know whether to be worried about that one or not.  GANNET showed no sign that she thought of it as home.

I saw most of them, some not until I was within a quarter mile.  Fortunately I did not ever see a line of breaking surf directly ahead.  By coming straight in from the east I saved myself fifteen to twenty miles.

Two miles out, I furled the jib and raised the mainsail.  I find it easier to anchor under mainsail than jib. I also pulled the anchor and rode deployment bag onto deck, and knowing I would be anchoring in about 12’ of water tied the rode off at the 60’ mark, intending once the anchor was set going to 90’.  With this wind, I have gone to 120’.  Hand steering, I rounded Cape Grafton and had the anchor down at 1300.

I would like to get myself really clean and dry out the boat.  Neither of those are going to happen in the near future.  I have straightened up the cabin some, taken a cat bath and changed into dry clothes that are already somewhat wet.  I have not reconfigured to harbor mode and will sleep tonight on the port pipe berth on a moist sleeping bag.

Going on deck repeatedly last night I chased five birds from the cockpit, or possibly one bird four times.  Once when I went up there were two birds.  I am considering changing GANNET’s name to THE ROOST.

In lieu of a noon position:

I am the only boat in this three mile wide Mission Bay and I anchored in the very worst spot.  GANNET is rolling more than if she were at sea.  Worse because no sails are up to stabilize her.  Last night she spilled a tumbler of wine into the bilge.  Bad GANNET.

I know I could solve this in ten minutes by raising the mainsail and raising the anchor and moving 150 yards to the northeast or anywhere else in the bay, but I also know I won’t.  I can live with this until tomorrow.  I’ll just have to pay closer attention to my wine.

The day has not yet been as bad as forecast.  We had only a brief shower just before dawn.  While we have no sunshine, I have the hatches open and a few things, including my foul weather gear in the cockpit drying in the wind.  GANNET smells like a wet dog.  Or maybe that is me.  Bad Webb.  Hopefully the breeze will help us both if rain holds off.

I reconfigured the cabin this morning into day sailing and

(A brief interruption to bring things in and close the hatches.  Light rain.)

I also scrubbed and killed mold.

I checked out the Yellowbrick tracking page.  Set to Satellite view and zoomed in, it shows our course through the reefs quite well.  I’ve deactivated the Yellowbrick.  When I hopefully remember to reactivate it tomorrow morning, I’ll have it update positions every two hours.  I may turn it off each night but probably not.  I’d just as soon not have to think about it.

I neglected to mention that Saturday night I shared the rain with a fishing boat as well as roosting birds.  Her lights were at various positions around us most of the night.  Fortunately at a reasonable distance.

Also yesterday as I was heading in, three day trip boats passed me heading out.  Not a day for a trip to the reef, but I suppose if you are on vacation and have bought your tickets, you go anyway.

I’m not going to upload the passage log from Bundaberg until I reach Darwin and it is complete.  This is a passage in three acts and we’ve only had Act One.

Briefly, I saw many ships near the southeast corner of the Great Barrier Reef.  I used sheet to tiller about half the time, but was glad to have the tiller pilot hold a compass course yesterday through the reefs.

Tomorrow evening should see us anchored behind the Low Islets 35 nautical miles NNW of here.

I should be in Darwin in slightly less than three weeks.

The photos were taken from GANNET this morning.
Posted by Webb at 7:53 PM