Hilton Head Island: the other side; books read; 17,520; neighbors 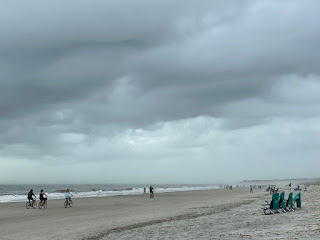 Thanks to Carol’s family we have the use of a car for a while.  A few days ago her parents, sister and brother-in-law, drove down from near Charlotte, NC, in two cars and left us one.  We are appreciative.  It has enabled Carol to venture to stores beyond the convenient five mile bicycle range and yesterday for us to go to the other side of the island where we had a picnic lunch and watched people and dogs and birds and a dolphin just off shore.

The ocean side of Hilton Head is a different world than where we live on Skull Creek.  A beautiful wide white sand beach stretches almost all of the island’s eleven mile length and is the primary reason almost three million tourists come here every year.  Or every normal year.  They even come in the winter when as you can see the sky is overcast and the ocean cold.  48º F/9C today.

The ocean side is a nice place to visit, but I’d rather live here with the live oaks and spartina and quiet.

Here is the list of books I read in the last six months. 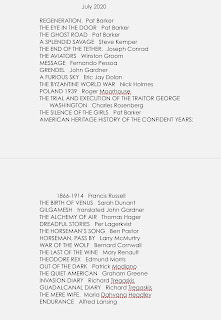 I worked out more than 100 times last year for the first time in nine years.  If I do my primary workout three times a week that would be 156 times a year, but always there are interruptions.  Last year a sprained ankle and a skin cancer removed and while I can do the full workout on GANNET’s foredeck I can’t at sea and for whatever reasons I did not while GANNET was in San Diego. I think it is a matter of routine that I never got into in San Diego. 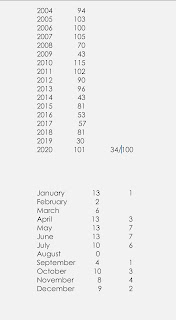 I don’t recall why I started keeping statistics in 2004.  I have done some version of this workout for more than 50 years.

Of the 101 workouts last year, and that does not include weights or resistance bands, 34 of them were what I call 100s.

I started writing this entry, but before I posted it Carol and I biked to Dolphin Point.  Along the way we passed a pond around which were dozens of cormorants and egrets.  I commented that there must be a lot of fish there. 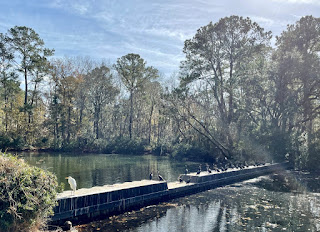 On the way back come further confirmation. 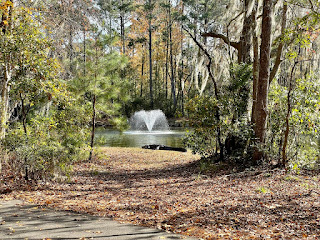 That is the bike path in the left foreground.

A closer view.  Enlarged, not by my getting closer. 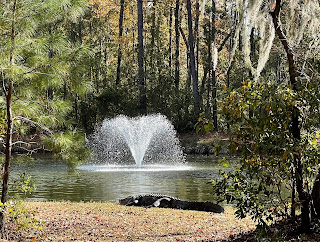 Autocorrect change that I did not see. Thanks for your catching it. Correction made.