Some scientists and engineers read this journal.  One of them, John, sent the following after viewing the video about water circulation yesterday.  I am very grateful for his analysis and want to publish it quickly to correct misconceptions.

I enjoyed the video of the guy with the swirling funnels at the equator but my BS alarm went off.
Here's a back-of-the-envelope estimate of what's going on.  The circumference of the earth at the equator is about 25,000 miles so people at the equator are riding the planet at a speed of 25,000mi/day or 25,000 / 24 =1,040mi/hr, due east.
At a latitude of 45 deg the circumference of the earth is about 0.707 x 25,000 miles =17,675 miles.  People at this latitude are riding the planet at a speed of 17,675mi/day or 17,675 / 24 = 736 mi/hr, due east.
So if a person at the equator aimed a gun due north and shot a bullet, there are two velocities to consider: the muzzle velocity of say 100 mph due north and the easterly velocity of the shooter at 1,040 mph due east.  As the bullet heads toward 45 deg N the people there are only moving at 736mph due east so the bullet, with its 1,040 easterly velocity will veer to the right over land (to the east).  If you shoot from 45N to the equator, the low easterly starting velocity will make the bullet veer right over land again (more to the west).
Back to our guy with the funnels.  The diameter and circumference of the earth vary as the cosine of the latitude.  If he moved the funnels 30' north of the equator, the circumference of the earth changes immeasurably.
Oops, I just Googled a reference and came across the link below that says pretty much the same thing.  I like my version better though.
https://www.scientificamerican.com/article/can-somebody-finally-sett/#:~:text=A%20toilet%20or%20sink%20is,in%20a%20sink%20or%20toilet.

To which I replied:

Thanks for this.  I will post it.  I sensed entrepreneurship in the video but lack the math to refute it.  Also I wondered because my experience has been that the Intertropical Convergence Zone, which I still think of as the Doldrums, is not on the Equator.  In both the Pacific and the Atlantic I have found it several degrees of latitude north.  Your email caused me to google after all these years, though much of my sailing life took place before googling existed, as strange and distant as that may seem, and I found some answers.
Here is a screen shot from today’s Earth Wind Map clearly showing the Convergence Zone in the Pacific well north of the Equator. 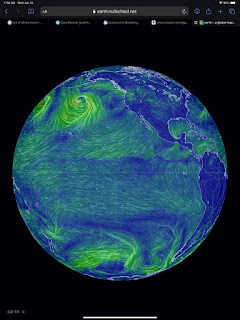 And here is a link to an explanation why.  I really should have sought the answer to this years ago.
https://en.wikipedia.org/wiki/Asymmetry_of_the_Intertropical_Convergence_Zone

My BS alarm was also going off watching yesterday’s video. Perhaps we could ask for the ‘Equator” bowl to be used N and S please? Those different bowls worried me!
Could of course be the water? One drawn from a Northern well one a Southern well and one from an equator well? 🙂!