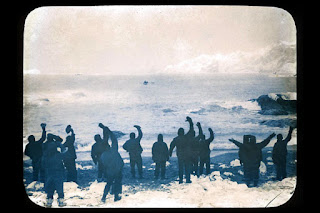 The above photo comes from NASA’s Earth Observatory site today.  It was taken April 24, 1916 and shows Ernest Shackleton and five men setting out from Elephant Island near Antarctica in an attempt to reach South Georgia Island and help after their ship, ENDURANCE, was crushed by ice.  Their boat was bigger than CHIDIOCK TICHBORNE, but not much.  They were truly sailing into the unknown.  Shackleton thought, I believe rightly, that they had no choice.

The article caused me to buy the Kindle edition of ENDURANCE by Alfred Lansing, a very good book that I have not read for a long time.

On the Sailing Anarchy site is a brief piece about a sailor who makes voyages to no where in his Cal 20.  I highly approve and as I mentioned a couple of weeks ago am contemplating doing so myself around Bermuda next year. 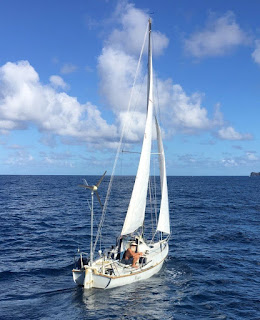 In studying the photo I am uncertain about his means of self-steering and I do wonder about his timing.  He will be in the South Pacific during the cyclone season. I conclude that I am going to have to grown a beard if I ever want to be taken seriously as a sailor.  I wish him a safe and fulfilling voyage.

I'm thinking jib-sheet-to-tiller steering. I think I can see a dark line proceeding from the tiller end to the port toerail -- then maybe back toward the companionway? (I don't see its connection to the jib itself.)

There is some serious modification around the transom of that boat.