It has been said that you may not believe in climate change, but your insurance company does. Recent reports from NOAA and NASA show why.

First, NASA’s final evaluation of the 2020 hurricane season.  What I find most interesting and living where I now mostly do alarming is the explosive intensification of storms, three of which saw increases in wind speed of more than 80 mph in twenty-four hours.  Hurricane winds start of 64 knots/74 mph.  That is unpleasant but not serious.  I have been in such storms at sea at least six times.  Maybe eight.  But add 70 knots/80 mph and you have a looming disaster.

We were not prepared for the hurricane season this year.  We were not here for much of it.  We will be prepared next year.  If Carol is here with me and we have a car, we will evacuate to her family’s homes near Charlotte.  If I am here alone, I won’t.  But the problem of when to evacuate has become more difficult.  One probably wouldn’t for a Category One storm.  If possible one would for a Category Four or Five and now we realize a Category One can become a Four or Five overnight.

NOAA’s report shows that through early October the United States had experienced in 2020 sixteen weather/climate disasters that resulted in more than one billion dollars in damages each.  This ties the record for such events with three months still to go.  The number of such events is increasing.  Your insurance company knows and so I expect do you when you pay your increasing premiums.

I have made the transition from iNavX to iSailor.  I spent a couple of hours one afternoon studying the 180 page users guide—sigh—and now know how to do the things I want to do with it.  Or at least I think I do.

From it I have learned that GANNET is 509’/155 meters from where I am sitting by our bedroom window being distracted by several squirrels scurrying along live oak limbs. 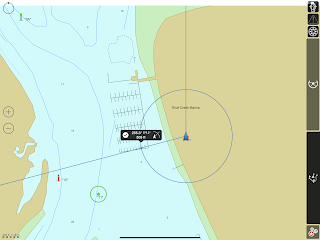 I put in a waypoint off Bermuda.  I did not realize that Bermuda is due east of Hilton Head Island. 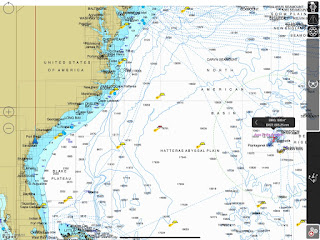 Unless my plans change I will sail there next May or June, but I may not stop.  I may just use the island as a turning mark.  I have never been to Bermuda and am told by those who have that it is a very nice place, but I recall the Boston matron who when asked why she had not travelled replied, “But I’m already there.”  Oliver Wendell Holmes is responsible for “Boston is the Hub of the Solar System” which was naturally expanded by Bostonians to “The Hub of the Universe.”  Being on Hilton Head Island I sort of feel the same way:  I’m already there.

An update of the Roomba app caused me to examine it more closely and I am amused to find that it records the unit’s activity history and provides a map of its coverage. 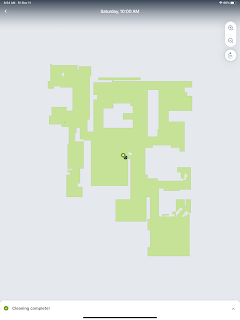 That’s our condo.  The areas shaded green were cleaned, those white include furniture, closets, the utility room which the Roomba could not enter because the door was closed, and walls.

We biked to the supermarket while it worked.  My maid duties have decreased.

A squirrel just made a daring leap from the branches of one tree to the branches of another about four stories above the ground.  There are times that squirrels, like people, cannot make a mistake.

I scraped and sanded the port rub rail on Wednesday and taped and painted it yesterday.  I’ll put a second coat on today and then turn the boat around or pump up the dinghy and do the starboard side.  While working I noticed that there is some growth at the waterline near the bow. Disappointing when I antifouled only a little over three months ago but easily removed.

The bit about the squirrel reminds me of an article I read a while back. It theorized that a cannot die from a fall due to its low terminal velocity.
https://medium.com/swlh/why-a-squirrel-would-never-die-from-falling-no-matter-how-high-it-falls-bd2dfb44e231
It’s an interesting read/piece of science but I wonder how true it is in actual practice?