Hilton Head Island: Vivaldi and Max Richtner and Icarus and me.

Not in that order.

I am presently listening to Max Richter’s reworking of Vivaldi’s FOUR SEASONS.  What admirable nerve to attempt a variation on one of the most admired and most recorded compositions in Western music, and he succeeds.

My birthday went as I expected, except there was no martini.  I had two glasses of Cabernet Sauvignon and then a carefully measured two ounces of Laphroaig, which I took out and drank on the deck with Live Oaks and Spanish Moss and Skull Creek ahead of me and the open sky above.  As was commented about my most recent video, I feel quiet satisfaction in knowing that the ocean is one and that GANNET whose mast I can see from our windows and glass doors could sail from where she is  to anywhere the ocean reaches. As I have written elsewhere, though I used the third person pronoun, I hold the world in my mind.  Perhaps she will.

Which brings us to the question I alluded to a while ago and considered dropping, but I have had two martinis and my instincts are weakened so I ask.

Many, perhaps most, of you would like me to circumnavigate again.  To attempt Cape Horn in GANNET.  My question is why do you want this?  What is in this for you?

I provide from the lists on the main state a quote used in the front of one of my books:

I am, I believe, following the clear path of my fate.  Always to be pushing out like this, beyond what I know cannot be the limits--what else should a man’s life be?  Especially an old man who has, by a clear stroke of fortune, been violently freed of the comfortable securities that make old men happy to sink into blindness, deafness, the paralysis of all desire, feeling, will.  What else should our lives be but a continual series of beginnings, of painful settings out into the unknown, pushing off from the edges of consciousness into the mystery of what we have not yet become, except in dreams that blow in from out there bearing the fragrance of islands we have not sighted.

--from AN IMAGINARY LIFE by David Malouf

Unexpectedly and unjustifiably, though if you have been paying any attention at all you know that justice is not a common part of life, I have in my old age found a place of beauty and the love of an exceptional woman,  You want me to leave this and attempt  to do something no one else has ever done or even imagined.  Something that will inevitably at the least cause discomfort and pain and may result in my death.

I add, needlessly if you have any concept of who Webb Chiles is, that this is not a referendum.  I will do what I think I should, as I always have regardless of others, but I truly would like to know why you want me to go to the edge of human experience again.  So tell me.

Yesterday I chanced upon a poem I have long admired, W.H. Auden’s, ‘Musee des Beaux Arts’ about Bruegel’s painting, The Fall of Icarus. 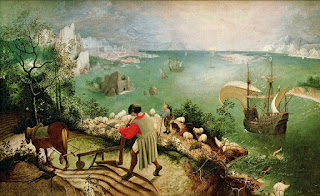 Look at the lower right corner of the painting, just below the ship setting sail.  That leg is all that is left of the drowning Icarus.

If you don’t know the myth, Icarus was the son of Daedalus who created wings made of feathers and wax so that he and Icarus could take flight.  The wings worked, but Daedalus warned his son not to fly too close to the sun whose heat would melt the wax.  Icarus with the blind impetuosity of youth did fly too close to the sun, the wax melted, and he plummeted to his death. 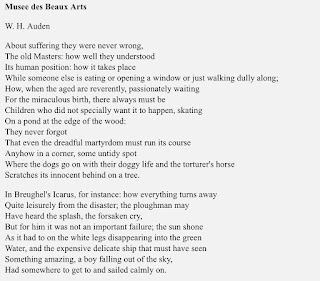 And I discovered that William Carlos Williams wrote a similar poem: 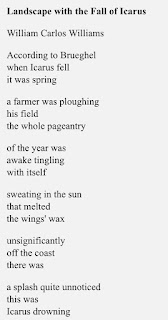 Ultimately blind numbers matter.  Inexplicably to me DNA demands to be projected into the future.  I have no idea why.

But I am struck by how a few rare small populations have done so much:  Ancient Greece.  Elizabethan England.  Two generations of Portugal around 1500.  Revolutionary America, which despite the historical myopia of Tom Brokaw, was unquestionably our greatest generation.

Somehow beyond explanation in some places for brief times there has been a concatenation of rare greatness of our species.

Not me I have had no thoughts about you doing another circumnavigation or cape horn. I enjoy reading what you write in your current situation and look forward to whatever you may be up to!

I do not WANT you to circumnavigate or round the Horn again alone. Of course, I don't care if you do or don't, and I guess it will make more exciting reading if you do.

But to the extent that your writing has made me happy and thus I want you to be happy, I WANT you to go sailing in way that allows you to be with Carol. Ideally, Carol will go with you on day sails and weekend sails near your condo, and maybe even to New England in the summer (although that would probably require a SLIGHTLY bigger boat with more comforts). But if not, do those sails alone and come back frequently to her.

I never expected you to circumnavigate again but I note Australian Jon Saunders has returned home to Australia aged 83 I believe having just completed his 11th circumnavigation.
Just enjoy your sailing wherever it may be.

What’s another line added to a long list of records?
Tis but a hollow, quickly fading, glow
Much like that of 2 ounces of Laphroaig
Warmly satisfying, but gone in the length of one sleep.

But, to be on the ever changing, never changing sea
Far from the shoals and shallows of land and man
A thousand miles of wake behind
Yet thousands of miles still ahead

And when it is done
There lies ahead, the knowledge
It can be done again, The cold comfort of the sea
Is balanced in perfect harmony with the return to the
Warm love of a woman.

I have sometimes wondered if Jon Sanders had any personal relationships in his adult life, but not enough to search to find out.

I only want you to keep enjoying adventuring and artfully sharing in whatever capacity you are able. I suppose some may want to see or believe that the epic life you have navigated can go on accelerating, unabated and forever. Your most recent loop in a 2000lb vessel while closing in on 80 does little to dissuade that belief. If you had done it with a slew of sponsors in a spiffy Halberg Rassey a change in pace might be a little easier for some to accept. Whatever you choose Im certain that you will do it in a way only Webb Chiles would. Ill continue looking forward to those reports from wherever that edge may be. Please continue to stay on this side of the edge for as long as possible!

My view is sailing matters a great deal to you, and I hope you don’t give it up. My view on suffering is that it might have been something you needed to subject yourself too, as a test, or as some sort of prerequisite to enabling your artistic sense. My view is also that by now you’ve done more than your share of suffering, and that you should keep sailing, and eschew suffering. Get a 36 footer and take Carol along when she feels like it. You could have 10 more enjoyable sailing years with that sort of plan. It’s not automatic that “Dying” can’t be enjoyed.

Thank you for highlighting two of my favorite poems.

Regarding your question: I wish you peace and enjoyment however you choose to define and find them. Selfishly, I hope that you keep writing regardless.

There are many Cape Horns out there. I've lost a couple of boats on my own Cape Horn. You have NOTHING to prove to any of us; yourself however...

Contemplate. Decide. Do whatever or not.
I would not pay attention to my comments or anyone else's comments.

you've made sacrafices to live the life you wanted and the way I see it is if you have a desire to do it again than go for it. After watching your youtube video at the end of your last circumnavigation you talked about the end of living part of your life. I think if thats how you feel than keep sailing and keep living until life is taken from you. You are probably one of a handful of people on the planet who could sail around the world alone in their 80's. why waste it

Rest and revel in the begetting of the old by the young.

Thank you, Unknown, I enjoyed the video and admire the dedication and talent.