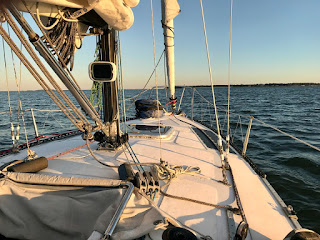 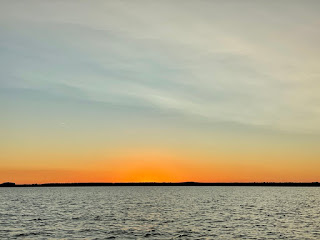 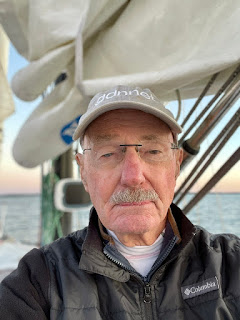 I went sailing yesterday for the first time since trucking GANNET east.  Leaving the land on Election Day seemed a good idea.

Cool in the morning, only 42F.  In another first I turned on the heat in the condo and I changed from shorts to Levis and put on a long sleeved shirt over my t-shirt.  I even wore socks, but they didn’t last when the temperature rose into the 60s in the afternoon.

I walked down to GANNET at 10 and left the dock at 11.  Torqeedoing away from the marina I raised the mainsail, but there was no wind and we whirred along Skull Creek until near the entrance when I unfurled the jib and we sailed.  Briefly.  A quarter mile out on Port Royal Sound the wind died and the outgoing tide tried to carry us out to sea.  We drifted for an hour before slight wind ruffled the previously glassy water and GANNET heeled a few degrees.

We headed north.  My intention was to go into Mackay Creek on the west side of Pickney Island and anchor there for the night.  A half dozen small powerboats roaring in and out of the creek changed my mind.  The creek is narrow and twisty and I could too clearly envision one of them roaring around a blind curve and smashing into GANNET, so we sailed a little farther north and anchored in 25’ of water at low tide at the mouth of the Chechessee River and the north end of Port Royal Sound.  I was out in the middle almost a mile from land.  You know I like space around me.  There was no shelter and no reason to need it.  In a straight line I was only two and a half miles from the marina.

As you can see the sunset was spectacular.  I had charged the Boom 2 speakers when I first came on board in the morning and of course I had remembered to bring the bottle of Plymouth Gin with me.  Drinks on deck.  Old times.

I had cell phone coverage, but did not listen to the news.  I slept well and when I woke at 6:30 there was five knots of wind from the northwest that I could ride all the way back to the marina, including the bend in Skull Creek.  I went to raise anchor and found it more difficult than expected because of the tidal current.  Finally it came up and surprisingly although it had obviously been well dug in, it came up clean.  Later in the day Fred, one of the dock masters, told me I must have been in sand and that there is a lot of sand in the Sound.  I expected mud.

GANNET was back in her slip by 8:30.  Fred had seen me coming and kindly walked down to take my lines, relieving me of the necessity of leaping gazelle-like onto the dock.

I shot some video, both on a GoPro and with my new iPhone.  I have yet to view them on my computer to see if they are worth sharing.

This is so good.  GANNET is alive at anchor as she is not at a dock.  And there is no human being within a mile of me, probably more.  Often there has been no human within hundreds of miles of me, but I have not been this alone for more than a year.

It is different than being in the condo where one too is always in the presence of beauty.  I can’t define the difference, except there one is on land and here on water and I am against all odds a creature of wind and water.  Earth, wind, fire, water.  My connection to Earth is Carol and I have nothing to do with fire.

After sunset now.  What little wind there was has died, but GANNET still moves with ripples and tide.

I am in the Great Cabin, but when a few minutes ago I stood in the companionway, I saw the last vivid dying light and felt a slight cool breeze against my face.

If you feel the need for more of my words, Sailing Anarchy has run the excerpt from STORM PASSAGE that I published here a while ago,  Scroll down to ‘Little Fugue in G Minor’.