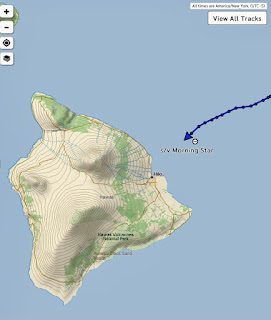 4 PM in Hilton Head and Lee is almost at Hilo, Hawaii.  Only 11 AM there.  I expect he will be in well before sunset.  MORNING STAR has had good sailing recently.  I see some 7 and 8 knots.
I biked to GANNET yesterday to remove the port pipe berth so I could measure the broken tube.  I didn’t expect it would be easy and for a few minutes it seemed impossible.
First I had to remove an aluminum track that holds the bolt rope at the head of the berth.  This requires undoing four bolts the nuts of two of which can only be felt not seen.  After some fumbling I did manage to secure the vice grip to them successfully and the track came loose.  In two parts.  It cracked at one of the bolt holes.
Then I removed everything stowed on and beneath the berth and in the space beneath the cockpit and lay down on the cabin sole and unlaced a long line that runs back and forth holding the berth in place.  Despite contortions unpleasant and unseemly for an elderly man, this went well.
And finally I had to pull the side berth bolt rope through a long aluminum track riveted to the hull.  It wouldn’t budge.  There was no possible position in which I could gain leverage.  I begin to think I would have to cut the berth and then try to work the bolt rope free somehow, but in a moment of frustration I tugged hard on the berth and a foot of the bolt rope popped out of the side of the track.  Once that was out I had leverage and the rest came easily.
I removed the broken aluminum tube and folded up the berth.  Then cleaned areas I have not been able to reach for years.
That the aluminum tube and track broke is not surprising.  I expect they are original equipment which means they are forty-one years old.
I was able to find replacement track online at SailRite and new aluminum tubing at a place called Speedy Metals.  The broken tube is 84” long, 2” outside diameter, with a wall thickness of 1/16”. I ordered two tubes with double the wall thickness.  A little added weight, but GANNET is not going racing under present ownership.  I ordered two to preemptively replace the unbroken but equally aged tube on the starboard berth.  Each cost about $90 with $30 shipping.
Without the port pipe berth GANNET’s interior is cavernous.  Well, relatively.  I’ll take a photo.
NASA’s Earth Observatory site ran a photo from space of Hurricane Iota
https://earthobservatory.nasa.gov/images/147539/dangerous-hurricane-iota-sets-late-season-records
I have been startled by how quickly several storms so rapidly intensified this year.  One day a Force 1.  A day later a Force 5.  It is beyond unjust that Iota made landfall twelve miles from where Eta did two weeks ago, but then you may have noticed that the world is not just.
https://www.forbes.com/sites/nextavenue/2018/12/07/its-quality-not-quantity-of-life-that-matters/?sh=12277a4d1579
This is harsh, but I’m going to have to live with it.  We all are.
I have written that life is only forty years long.  That what really matters and defines you is what you do from age 20 to 60.  It could be 25 to 65.  The point is the same.  The ‘being’ part of my life was 33 to 77.  44 years, but then legends by definition exceed norms.
I agree with the title of the article, but I am on the wrong side of 75.  To use Dr. Emanuel’s quote from Thoreau I have ‘sucked the marrow out of life’ and I never expected to get this old, but I am not Michelangelo, Benjamin Franklin, Goethe, or Verdi.  Or maybe...
I note that Dr. Emanuel is culture bound.  Are we to believe that there are no Chinese or Indians or Africans or others who were the equal of his four?
I am going to lie down and try to remember if I did my workout today.
(I did.  Went to 100-50-50.)
Posted by Webb at 3:45 PM

First, the actuarial stuff is always a little esoteric. Life expectancy varies by age. If you are 20, the odds that you make it to 90 are one thing. But if you make it to 75, the odds are very much better.

Second, the climate change thing is very much along the lines that storms will intensify more rapidly than in the past. Iota is a stark example.

Crazy Horse is an early boat with full length stringers instead of the tubes. After you add the time removing all the screws attaching the berths to the wood (in not the most comfortable positions) I tend to just cut the line and remove it in sections. It is usually worn where it runs through the holes in the fiberglass along the hull and need replacing anyway. That problematic knot is easy to deal with using a rigging knife. ha ha
Gannet is fortunate to have you as a caretaker. Enjoy the new 1/4 berths.
Richard
#21 Crazy Horse