A few evenings ago I watched on Netflix DAVID ATTENBOROUGH:  A Life On Our Planet.

He has indeed led an extraordinary life at a significantly transitional time.  He has seen more of this planet than almost anyone, and has done so with rare intelligence and sensitivity to all life forms, not just our own species.

The film is said to be his testament.  There are few ways, if any, you could better spend an hour and twenty-three minutes.

Not unrelated to David Attenborough, CBS News has an interesting analysis of the 2020 hurricane season.

The common theme is that our species is changing and destroying this planet.

This, like everything else in this too politicized age, is contentious.

I believe in science.

I believe that that which is quantifiable and replicable is not a matter of opinion.

My own experience over the decades is that I see fewer birds, both on land and at sea, than I did four decades ago.  I see fewer fish.  And hurricane seasons are much more severe.

In the mid-1980s few even thought about hurricanes in the Caribbean islands.  None had caused damage for years, even decades.  In 1984 Jill and I sailed in September from San Juan, Puerto Rico, south to Isla Margarita, Venezuela, at the height of the hurricane season.  This is only a three day passage.  We did check the weather before we left, but there was no real concern.  Today there would be, both because of the increased likelihood of a low rapidly intensifying and because of the lawlessness in Venezuelan waters, which is a shame because there are two groups of islands off Venezuela, Los Roques and Los Aves, which are wonderful isolated cruising grounds. To sail there now is too dangerous because of homo sapiens.

​We saw a wide range of sailing conditions, but no hazardous weather. For nearly a week we had periods of little wind alternating with utter calm, averaging less than 65 nm/dayfor the first six days out. Then for the next 12 we averaged 132 miles per, with a best 24 hour run of 145 nm. Winds seldom exceeded 20 kts, and the seas in that stretch were generally 8 – 10’ on a long period, making for a comfortable ride – at least in between squalls. Light conditions again beset us for a few days, before a final three days of decent speed took us into Hilo Bay.

There were days of squally conditions requiring frequent reefing changes. We had at least partial cloud cover most days, with several days of solid clouds and intermittent rain. That, of course, made the hand full of sunny days even more enjoyable.

Wildlife was not abundant. We did see plenty of flying fish (some with astonishing range in flight), a few pods of dolphins, and a half dozen or so specie of sea birds.   No squid boarded us, and only one flying fish came in for a landing.

We had no significant injuries or gear breakage. A cut to my left index finger on day 16 could have used a stitch or two, but the first aid treatment was sufficient.  The prescription antibiotics in the medical bag remain unopened.

The passage was completed with ship and skipper in good condition, and with food, water, fuel, and stamina still in reserve. The new genoa proved its worth through every configuration in which it can be deployed. The post-excursion to-do list is significantly shorter than the list we had after our 2018 sail to Hawaii and back.

In short, it was a lot of fun, with hours and days steeped in the beauty of ocean wilderness and the joy of adventure. As importantly, much was learned about doing this sort of thing – which is good, because I am counting on more of it. 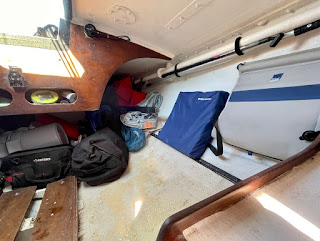 Well maybe not really cavernous, but emptier than I am accustomed to.

You can see in the photo the end of one piece of the broken pipe and that I need to repaint the hull beneath the birth.  I will soon.  It is too ugly to live with.  I  bought the supplies to do so today and will paint under the other pipe berth when I remove it.

The sentence could be seen as advice to be wishy-washy, but I see it as a willingness not to be rigid and a willingness to change upon receiving new information.  I like to believe that I am capable of such change.

As you probably know I spent zero time on Facebook and Twitter, but from my friend, Michael, I have learned how wrong I have been.

I have occasionally gently chided him for spending time on Facebook, but he recently relayed that from Facebook he has learned that oregano protects against the Covid virus.  I had no idea and immediately ordered a pizza to be delivered with extra oregano.

A poem from STAYING ALIVE: 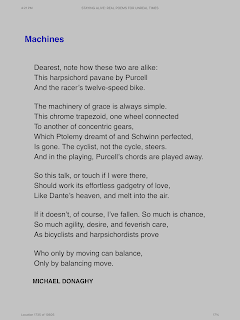 The lead photos were all taken walking out to GANNET yesterday,  In the last our condo is behind the Live Oaks on the left.