Boat business is good on Hilton Head Island.  In fact judging by lead times, it could not be better.

You may recall that I am waiting four to eight weeks before a rigger will be free to go up the mast and re-install the OpenWind transducer.

Last week I telephoned Kevin, a canvas man recommended by Fred, the dock master.  I need to have the v-berth cushions and the pipe berths replaced.  They are nine years and more than 30,000 sometimes wet miles old.  Kevin came by GANNET the next morning, climbed below, took measurements, and provided me with an estimate by email later that day.  The price was higher than I expected, but I am probably living in a time warp about these costs.  I accepted the estimate and I was given the next available time slot:  next March!  I don’t often use exclamation marks, but that deserves one.  I can wait and will.  As often noted, I have time until I don’t.

Snowbirds are making their way south.  I see them from our condo and Marc, the marina office manager, told me that they have so many transient reservations they are having trouble finding space.

I have sailed this coast Florida Keys to New England and back twice over the years.  I have always gone outside, stopping only in Beaufort, North Carolina or not at all.  Skull Creek is pretty.  I expect that much of the Intracoastal is, but I can’t imagine powering that far.  Not that GANNET could.

However, I am doing something about that and have ordered a second Torqeedo battery from Defender.  This will increase our range under power depending on headwinds and currents from 5-7 miles to 10-14.  My friend, Michael, declares that I am turning GANNET into a motor sailor. 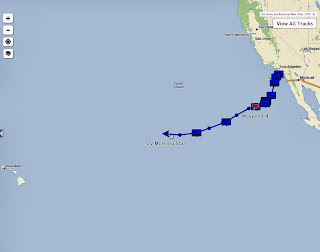 I have been following Lee on his passage from Catalina Island to Hilo, Hawaii, in his Valiant 32, MORNING STAR.  He fell into a windless hole a day out and drifted for a while.  One of his messages revealed that he cooks more at sea than I do, but then everyone cooks more at sea than I do.  Eventually he broke free of the coastal weather pattern and has reached good wind making 5 and 6 knots.  At his last position MORNING STAR was doing 7.7.

Occasionally at sea I have had the illusion that I was at the bottom of a bowl and that the ocean was rising all around me.  I don’t know what caused that, but a recent article I find interesting at the NASA Earth Observatory site states that the sea is not level, but varies by 2-3 meters/6-9 feet, that the Pacific is 20 centimeters/8” higher than the Atlantic, and that over the last 140 years the global mean sea level has increased  21-24 centimeters/8-9”.  I don’t think we are going to be able to leave this condo to our grandchildren.  Oh, that’s right, we don’t have any grandchildren.