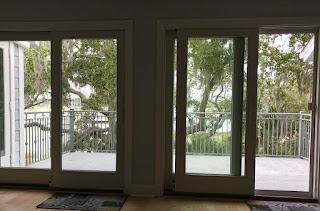 The above does not do justice to my view sitting in our living area, but it is the best my iPhone 7 Plus can do on an overcast, but very pleasant day.

I arrived yesterday after an uneventful flight from Chicago to Savannah and an uneventful Uber ride from Savannah Airport to the condo.  Both cost about the same.  Upon arrival I found several packages which had been delivered early sitting outside our door.  One of the virtues of a gated community is the absence of porch pirates.  Inside I found some things done, some not done, including some that we had been told were.  All are only finishing details.  The last less than 1%.

I biked to GANNET this morning and found that she has done quite well in my absence, but then I’ve only been away a month.  I hosed down the deck, fetched my knapsack and biked four miles to a supermarket.  Though there is a local ordnance requiring face masks in public on Hilton Head Island, these people do not believe in them.  I passed more than a dozen, most walking, a few jogging, two others on bicycles, none wearing face masks.  I wore mine mostly below my chin, but raised it to cover my mouth and nose whenever I was near anyone else.  I may or may not be a good person, but I believe scientists, not  politicians, and I do not suffer from contemptible pandemic fatigue.

As I have written here before the bike ride to the supermarket I went to today is largely on bike paths through woods and serene and beautiful.

This condo is about being in the constant presence of water, being able to glance up and see Skull Creek and the marina beyond live oaks and Spanish moss at any instant, about GANNET being a few minutes walk away, and about the silence often broken only by bird calls or the wind in the trees,  There is always noise in cities.  Here the silence is almost preternatural.  I love it and am glad to be in our new home.  Finally.

From Sam, an American with the good sense to be completing his Ph.D. in Australia comes a link to an article by a young photographer who over a course of five years walked the coastal perimeter of Great Britain.  What an excellent thing to have done.  I thank Sam.

I screwed up.  There is no denying it.  I don’t even offer an excuse.  Even now you may be in your mind providing one for me:  he’s become a doddering old fool.  I totally forgot my intended theme of the first part of last Friday’s journal entry.  At least I remembered that I forgot and have made significant changes.

Rather than ask you go back to read them, I present them here.

The title is now:  the beginning of being; packed; voted

The text, other than that from STORM PASSAGE which is not changed, now reads:

An email last week partly about Cape Horn caused me to dig up the above photo of a curly haired young man which was taken on November 2, 1974 and later used on the dust jacket—you may remember those—of STORM PASSAGE, and the entry in that book for December 12, 1975.

I believe I have run  that here before, but long enough ago that you have probably forgotten.

Cape Horn is not always like that.  If I remember correctly from the old Pilot Charts, even in the stormiest of months there is gale strength wind only about a third of the time, which is a lot, but means that two out of every three days are not gales.

The second time I rounded the Horn, in late January or early February of 1992 on a passage with Jill in RESURGAM from Auckland, New Zealand to Punta del Este, Uruguay, the wind died as we passed onto the continental shelf and the ocean was glassy, though not smooth.  RESURGAM was helplessly tossed around on left over waves and for one of the few times ever I turned on the diesel at sea and we slowly powered toward Horn Island visible twenty miles to the northeast.  As we neared, the wind came up again, now at twenty knots directly ahead of us.  I wrote:  'Sometimes Pavarotti has laryngitis; sometimes Cape Horn is just another place.'

I have recorded two videos titled ‘The end of being’ made on the last full day of GANNET’s circumnavigation.  I immodestly recommend them.

As you can see in the photo the mainsail is set.  In a few seconds when I release the line in my left hand, the being part of my life begins.

I will try to do better.  But doddering old fools can make no promises.

Sail on indeed Webb and may you continue to deal successfully with whatever winds come your way. Thank you for sharing with us.