Evanston: an amazing passage; whiskey islands; afraid of the water 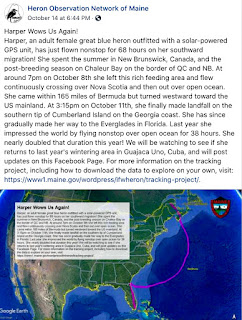 I trust that if you can read the above you are as amazed as I.

There are usually one or two Great Blue Herons visible from our condo in Hilton Head hunting in Skull Creek.  I have no idea if they are permanent residents or a shifting population of transients.

I try to imagine what was going through the mind and instincts of this bird as she intrepidly took off straight out to sea, what caused her to make that gradual turn near Bermuda, what keep her flying continuously for almost three days.  I could not sail continuously without sleep for that long.  I never have for less than half that and then only two or three times in all my voyages.

I thank Bob and Bev for the link and I wish Harper well. 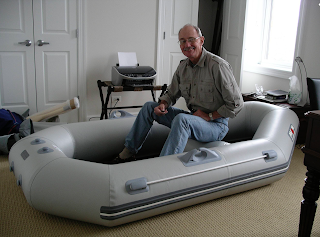 Michael has included a version of the above photo in a couple of recent emails which has prompted me to run it again.  Going back through the Photos app I find it dates from 2007.  That dinghy has now been twice around the world.  It is still in excellent condition which is good because it has to last my lifetime.

If you want to row an inflatable—and I realize that almost no one but me does—by far the best are Avon RedStarts, which is what mine is, or the slightly larger Avon RedCrests.  Unfortunately neither is still in production.  Avon, an UK company, was bought by Zodiac, a French company, who killed off their superior competitor.  It is not news that the best do not always prevail.

The caption I used when I first posted that photo came from an earlier incident.

A few years before I met Carol, I was in Key West on THE HAWKE OF TUONELA, where as usual I anchored across the harbor off Wisteria Island.  One day a young woman came out to the boat.  She was barefoot.  When we returned to shore the sun was up and the sidewalks hot, so we pulled the dinghy out of the water into a parking lot.  I sat there in the dinghy after giving the young woman my shoes to wear while she retrieved hers.  This caused comments to which I eventually formulated the reply:  “I love boats, but I’m afraid of the water.”