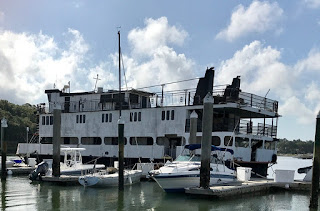 Little GANNET has again docked next to the biggest vessel in the marina.  This one is named FATHOM THIS and reportedly started life, seemingly about when I did, though I am in decidedly better shape even with a sprained ankle, as an excursion boat in New York City, which is the home port written on her rusty stern.

I am told that she belongs to a middle son of a large family who were featured on a television series called Alaskan Bush People, or something like that.  I had never before heard of it.  The boat’s engines do not work and it was towed to Hilton Head from I believe Charleston by a shrimp boat.  Mechanics have subsequently not been able to fix the engines.  The owner’s plan is to take it south to Florida and then across to the Bahamas where it will function as I know not what.  I do know that it will cost a fortune to restore it to a useable condition—I deliberately choose not to use ‘her’—and while not a business man cannot see how this can ever be a profitable venture or a good idea.

In the meantime it is big and heavy and in a serious storm may destroy the dock.  I hope that it is gone before such a storm arrives.

This morning I notified Boat US that GANNET is again in Hilton Head rather than San Diego.  GANNET has been insured by Boat US ever since I bought her and I know that rates for the same level of insurance vary widely from state to state.  California, usually an expensive place, is not for boat insurance.  Illinois is also low.  Florida the highest and South Carolina also high.

I went down to GANNET Saturday morning and restored order to the interior and partially on deck.  I moved a lot of stuff, including the Jordan Drogue, that had been in the dock box in San Diego, to the dock box here, and sorted out halyards and other deck lines.

I will bike down in a little while and attach the boom and likely the mainsail and scrub the deck.  The mainsail is only ‘likely’ because we drive to Charlotte Sunday and I will be leaving GANNET with more than a month of the hurricane season to go.  I don’t intend to bend on the jib.

Medical Bulletin 3.  My foot is almost normal size, at least when I first wake up in the morning, but the ankle is stiff puffy.  I thank those of you who have expressed sympathy and advised that similar injuries you have experienced have taken a long time to heal.  There is no doubt in my mind that old fools heal more slowly than young fools.  At least I do.  The great news is that I was just down testing if I can ride a bicycle.  I can.  No pain whatsoever.  Far better than walking.

For your whole marinas safety lets hope that "Ferry" is moved before you get any bad weather!

Thanks, Dennis, I will call State Farm.

Have you investigated a liability only policy? The marina presumably requires proof of liability insurance, but not necessarily loss.

Since you don't have a boat loan, I expect, you don't need it for the loan, and you can decide if you could absorb the loss (financially speaking, emotionally I you have a clear eye).

Our yacht club requires loss insurance as well, lest an owner might feel the club should somehow be primarily responsible for their boat. Seen that in the past.

When Markel exited the multihull market, USAA sent me to Progressive. Not a yacht policy, but replacement cost for me and I expect you is less important.

About the State Farm boat insurance, we have our home and auto policies with State Farm, probably why the sailboat insurance is not so expensive. Also, possibly, there is no engine.

I used to occasionally view the Alaska people cable show and, watching their antics, can assure that this type of ferry would exactly be another adventure scenario for them. What a daunting hulk.

Have you checked out simple physical therapy videos on youtube? It could speed your recovery.

You are a gift to the US sailing community.

I had physical therapy with great success several years ago for a torn rotator cuff. I may try some exercises, but for now I think it still needs time.