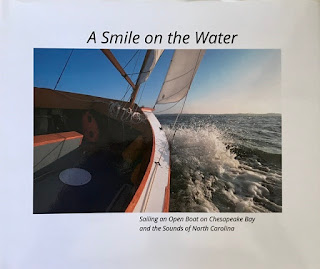 Steve Earley has become an industry.  Everywhere you look, you find him.  I fully expect he is making appearances on daytime and late night talk shows, but I don’t watch them so can’t say for sure.

Above is a wonderful book he has produced of photographs of his cruising his 17’ Welsford Pathfinder, SPARTINA, on mid-east coast waters.  Steve was a professional news photographer, but I don’t think he was paid for many of these excellent and evocative images.  They and the book are a labor of love.  I know you need money, but not as much as most people think, and I believe it is better to do what you love whether you make any money at it or not.

Most, perhaps all these photographs have appeared on Steve’s website over the years.

I remember most of them.  Individually each is interesting and beautiful—one reminds me of a painting by Winslow Homer—collectively they capture the experience of open boat cruising better than anything else I know.

Unfortunately the book is not for sale.

Steve created it for his adult daughters, Taylor and Grace, who helped him built SPARTINA and often crewed on her.

The book is expensive to print.  I might even say obscenely so.  But if it could be produced in sufficient quantity, it would make a wonderful gift, including to oneself.

As if that were not enough, Steve and Curt Bowman are also featured in a fine article in the Oriental, NC, TOWNDOCK.

Although I have known Steve for many years, I learned from the article that SPARTINA was the first Pathfinder to be built in the U.S. and Steve tells me probably the third in the world.

Steve’s had a pretty good week.  I wish him many more. 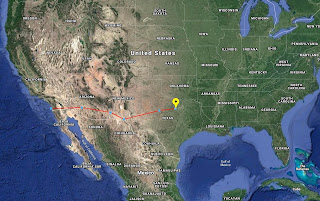 GANNET has come to a stop on the edge of Fort Worth, Texas, where I expect she will spend the Labor Day weekend.  She is halfway across the country and is due to start the second half next Tuesday.

I had almost forgotten that GANNET was once a Texas boat.

As far as I can determine, her first owner lived near San Francisco Bay and sailed her there for a year or two, before selling her to a Texan who towed her to Lake Texoma on the Texas/Oklahoma border about a hundred miles north of Fort Worth.  He eventually sold the little boat to a man who lived in Duluth, Minnesota, who later sold her to another resident of Duluth, who in 2011 sold her to me.  I freed GANNET from the land and lakes and she freed me.  I don’t know if she liked lakes.  I know she loves the open ocean.

I deleted from iNavX the waypoint at the entrance to the Mission Bay Channel.  I am now pointless.  No doubt many think I have been for a long time.

Public curiosity about my ankle is insatiable.  Unfortunately the news is not good.

After improving each day until I could walk almost normally Tuesday morning, the ankle has been worse since the flight from San Diego, particularly when it stiffens up.  Getting out of bed in the morning is unpleasant.  I considered going to a walk-in clinic—for me hobble in—but they have changed their procedures because of the pandemic in quite reasonable ways, but with which I can’t comply unless I want to sit on the sidewalk until they text me.  I suppose I could put out a cup and see if I make any money.