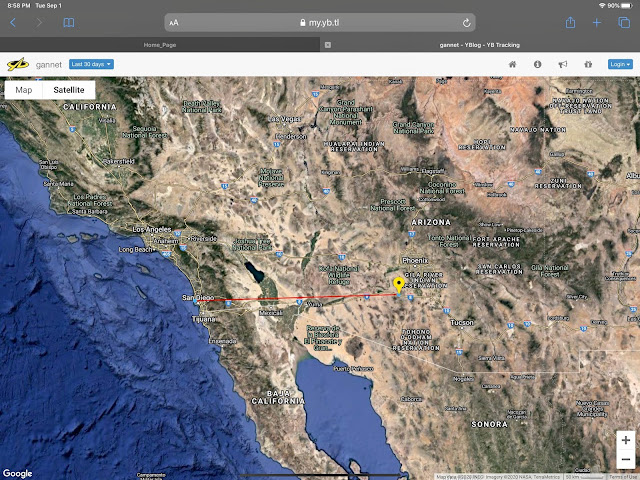 So I have returned to what passes as the real world.  Ice in my gin and on my ankle.  Tennis and baseball on the television.  A solid internet connection which has enabled updates of dozens of apps and operating systems on iPhone, iPad, MacBook.  A vision of Carol looking truly fetching as I came through the door.  A dinner of fresh rather than freeze dry food:  grilled salmon, broccoli, a quarter of a sweet potato, with a bite size carrot cake for desert.  I am very glad to be here, but if this were all there were it would not be enough.

I also returned to find as shown on the above screen shot of the Yellowbrick tracking page that GANNET is in Arizona making 40 knots east.

My last evening on the little boat’s deck in California was odd.  Odd because I felt no loss or regret in leaving a place that is probably the most significant on land in my life.  Any world any of us knew forty years ago no longer exists.  Maybe even twenty years ago.  And San Diego is no longer mine.  I could no longer make the connections with my grandparent’s house, with the women, the places.  I looked across Quivira Basin and tried to visualize Webb Chiles rowing CHIDIOCK TICHBORNE away from the marina on the other side to begin the most audacious voyage I have ever attempted, or perhaps anyone ever has, in 1978, and I couldn’t.

So I watched birds.

Only a hundred yards or so distance from GANNET’s former side-tie is a different bird world.  A Great Blue Heron frequents the dock below where we were in the boat yard.  An osprey stands every evening on a masthead, often so still for so long that I wonder if he is real until finally he moves his head or wing.  A hummingbird sought something from the tree just off our stern.  Two pelicans circle overhead.

I set the alarm for 6 AM this morning, but woke at 5 and got up.  Had my normal breakfast of grapefruit juice, coffee, uncooked oatmeal, trail mix, protein powder, powdered milk with the last of the fresh blueberries.

At 8 I heard someone outside the hull and stood in the companionway and found Sandy, the truck driver.  He had arrived the night before.  He climbed up the platform ladder and took some measurements.

The yard had scheduled GANNET to be loaded at 9 AM.  Both Sandy and I know that yard times are seldom real.

I needed to go to the airport at 9:30.  When Howard kindly  came then to take me, GANNET was due to be next in the travel lift.

Of all my years and all my time in San Diego, Susan and Howard have been my friends longest. I am fortunate in my friends.

The airport experience was not pleasant.

I pay for and go through the screening process for Global Entry which also gives me TSA Pre, but in many airports now TSA is not doing Pre.  They weren’t in San Diego today and the security area was disorganized and without social distancing.  And so was the seating area at the gate.  While although every other seat was blocked off and face masks are clearly required, a young woman across from me spent a half hour talking on her phone with her mask down and someone behind me repeatedly coughed, hopefully facing away from me and with face mask in place.

Once on the plane conditions improved thanks to Carol paying a little extra for an Exit Row window seat for me.  I had the entire row to myself with hardly anyone else ahead or behind me.

I was on the left side of the plane and as we took off I looked down on Harbor Island Marina, where I first met Susan and Howard when we lived aboard boats there in the early 1970s, they on a heavy about 46’ I think gaff rigged wood FAYTH; I first on the Ericson 35 EGREGIOUS, then the 37’ EGREGIOUS.  As the evening before when I tried to visualize leaving Quivira Basin in CHIDIOCK TICHBORNE, as we climbed I tried to visualize pushing away from the dock for my first attempt at Cape Horn from that marina in 1974 and on my successful one in 1975 and I couldn’t.

On the flight I watched the movie GLORY which is good and I have seen before and several short travel films, one about Hilton Head and the South Carolina coast.  It was interesting to see Hilton Head through tourist eyes.

Flying is not good for sprained ankles.

I was decidedly better yesterday than Sunday and again better this morning than yesterday until I got on the plane where the ankle swelled and stiffened.

Want weight loss?  Live on GANNET.  I left Evanston 153.  I returned 151.5.  However I won’t be doing any push-ups or climbing stairs for a while unless I can do a push-up with only one foot in contact with the floor.  Maybe tomorrow I’ll try.