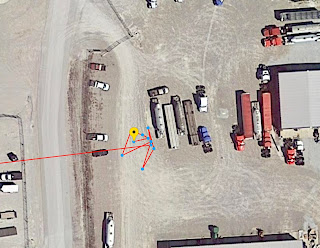 If you zoom in on the Yellowbrick tracking page you can see GANNET dancing around a big rig parking lot just west of Weatherford, Texas.  I fly tomorrow morning to join Carol in Charlotte, NC, from where she will drive us to Hilton Head and I hope the finally completely renovated and completely delightful condo.

I sometimes claim to be ahead of the times, but in one way I most certainly am not.  Or rather I am in tune with one trend which goes against a much greater one. 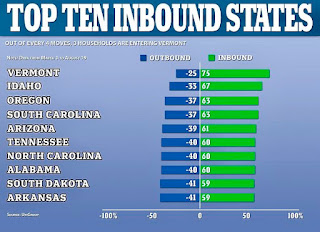 Larry sent me a chart showing the ten U.S. states which have the highest percentage of people moving into them rather than out.  I thank him.  South Carolina is number 4.  I note that although there are cities of some size in some of these states all are basically rural.  I know that I am not an urban animal.  One of the advantages for me of Hilton Head Island over San Diego is that there are now too many people in San Diego.

In truth none of us are urban animals.  Our species evolved wandering around plains and savannas.  We are not designed to be living in ant hills with millions of others, yet that is by far the greater trend.  Only a few years ago the percentage of the world’s population living in urban areas first exceeded 50%.  It is currently 55% and is predicted to be 70% by 2050.  I am glad that I will not be one of them.

Matthias of OpenWind sent me an email.  He had read of my problems with the unit.  I had decided not to write to him until I learned how the unit is working when GANNET reaches Hilton Head.  There seemed no point in asking a unit that is working properly, which GANNET’s did after the mast was lowered, to be repaired.

Matthias told me that they have identified this random connection problem with some early units.  That it is intermittent and unpredictable made solving it more difficult, but he says they have with a firmware update, so I will ship the unit to OpenWind from Hilton Head.

I have been and continue to be impressed with OpenWind support and hope the unit comes back gremlin free.  When it connects, it is excellent.

From Sam in Australia came a section of an article from THE GUARDIAN.  It ends:

Humanity is divided into two:  on the one hand, those who are improvising their way through life, patching solutions together and putting our fires as they go, but deluding themselves otherwise;  and on the other, those doing exactly the same, except they know it.  It’s infinitely better to be the latter.

A few evenings ago I read in the STAYING ALIVE poetry anthology, a poem that continues to bring a smile, ‘Naked Vision’. 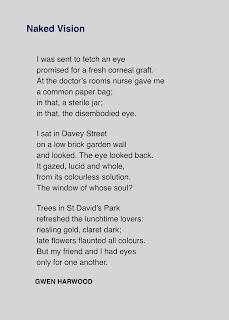