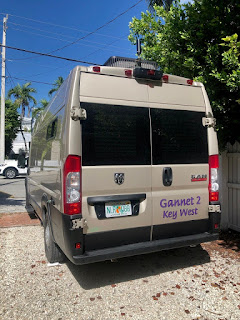 Michael, who answers 911 in Key West, walks his noble Carolina Dog, Rusty, and is married to the long suffering Layne, has with her bought a van in which they plan to live and travel when they retire in a few years.  It has just been christened GANNET 2.  Michael and Layne have lived on sailboats.  Living in a van is similar, although the van points higher and goes to windward faster.  GANNET and I are sincerely honored and wish Michael, Layne and Rusty, the joy of vanning.
Here is a link if you would like to see more.
https://conchscooter.blogspot.com/2020/07/miami-heat.html
I thank Tim for a copy of a news item from the June 28, 1898  issue of the KANSAS CITY JOURNALl upon the completion of Joshua Slocum’s circumnavigation.  It incorrectly says that THE SPRAY was 33’ long.  She was 37’. 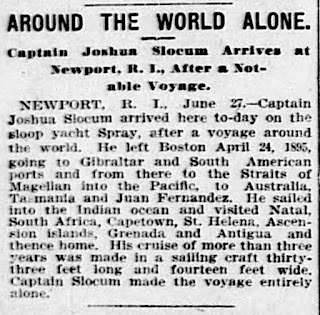 Yesterday while waiting for our mattress to be delivered, this tried to hitch a ride.  It remained sitting on the car for quite a while, but when I finally got out, it flew away.  We never did understand what it was trying to tell us. 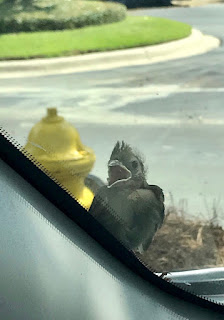 While the mattress was delivered as scheduled painters were working, so we had it left on the floor of the dining area and will not try to sleep in the condo until tomorrow night when workers should be gone for the weekend.  It will very much be camping out.  The main bathroom and shower are functional as are most of the kitchen appliances.  Work which was initially supposed to be completed by mid-May, then mid-June, is now said will be completed by the end of July.  During the day we will be largely confined to the screened in porch, which is not air conditioned but does have a ceiling fan, or have to find other ways and places to occupy ourselves.
We moved from the Marriott on Hilton Head’s beach to a Marriott on Savannah’s riverfront about twenty-five miles to the southwest for these two nights.  Savannah is the oldest city in the state of Georgia and a major port due to planning to handle the bigger ships passing through the new Panama locks.  We haven’t seen much of the town and won’t this time because of the pandemic.  We were able this morning to take our coffee and muffins down and breakfast quite pleasantly beside the river. 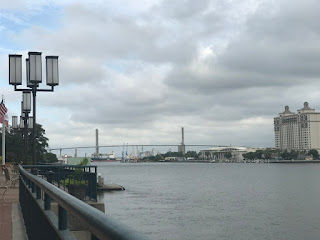 After a home victory athletes often give credit to their fans.  An interesting article in this morning’s NY TIMES shows that based on data from the reopened German Bundesliga where matches are played in empty stadiums indicates that they are right.  Home field advantage is the fans.
https://www.nytimes.com/2020/07/01/sports/soccer/soccer-without-fans-germany-data.html
Another article in the TIMES says that the boat business is booming.  Whoever wrote it seems to think that all boats are power boats.
I quote:  In comparison to other big-ticket items like planes or even cars, there is surprisingly little to learn when driving a boat; MarineMax sends a captain out with clients for a single four-hour tutorial.
I thought you would want to know that.  It explains a lot.
Posted by Webb at 10:13 AM

Four hours of professional tutoring is far more than most boat owners have had.

I was taught sailing from my dad at a young age and continued to learn by reading. In spite of a lack of professional training I've been hire to teach sailing from time to time.

Thanks for your great books and other writings.