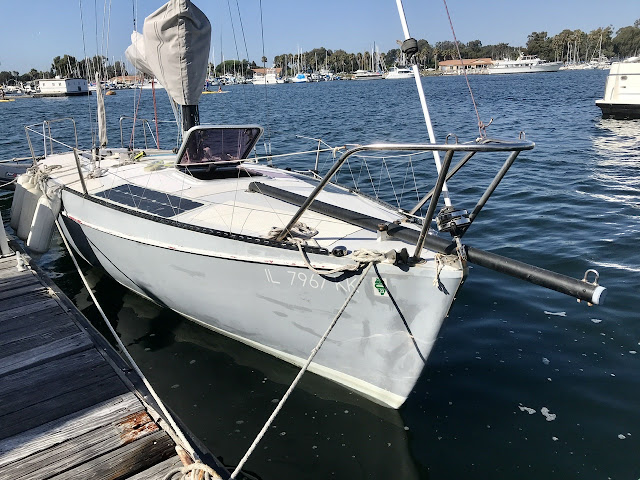 A lovely day in San Diego as is to be expected, though yesterday a fog bank lingered just offshore and the wind blowing through it was cool.  Today sunny and warm.
I pumped up the Avon this morning and spent a couple of hours leaning out of the dinghy scraping tons of growth off GANNET’s very dirty bottom with a putty knife and a brush.  Perhaps I exaggerate, but only slightly.  Hard growth and soft.  Some of it probably was eatable, but its appearance was not sufficiently appetizing for me to experiment.  No doubt there is more that I could not reach, but the worst growth is near the waterline which as you can see in the above photo is again white.  It wasn’t when I arrived.
As you can also see the little boat is in serious need of a topside paint job.  I don’t yet know when or where that will happen.
I took a break for lunch before moving from the port side to starboard and when I finished rowed around the bait barge.  There were only three sea lions, two on the barge, one sleeping on the ball float off the end.  They have been mostly quiet, but one is arkking as I write.
With the dinghy not presently on the starboard pipe berth, tomorrow I will slither aft and replace the stern deck running light, and then go for another row.
I naturally socially distanced today.  I didn’t go ashore and only left GANNET’s immediate vicinity to walk up to the trash bin, and I haven’t spoken to anyone except Carol on the telephone.
Posted by Webb at 6:56 PM