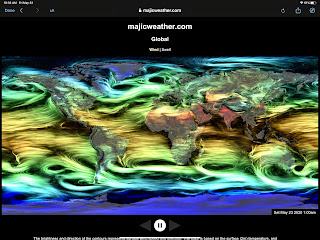 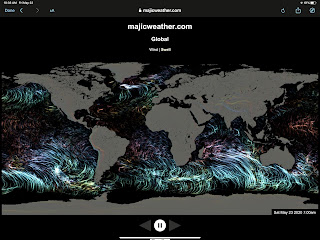 I thank Steve Earley for two links about a beautiful weather visualization app created by a New Zealander.  The images above are from the app.  The top one wind; the lower swell.

Here is a link to the app:

And here a link to an article about it.

A heading of an article in the NY TIMES:  Now is no time to read alone.

First I’m not supposed to drink alone and now I am not supposed to read alone.  This is absurd.  Everything has to be done in a group?  I don’t think so.  Being alone at the time, I didn’t read the article.

Of group activities I stand with Ogden Nash:

I thank Dan for the link to a long article about a very wealthy man who has become the first to go to the deepest points in five oceans.

Normally if the price of admission is in the millions I am not interested and while I agree that many so-called records are absurd, I do not agree that this is one of the last meaningful records that can be set.  I am also skeptical about reports of 90’ waves.  However, I found the article of interest in the process and the findings and the people.  We have a submersible designer who never read a book on submarines because he does not want his thinking tainted.  A businessman who takes on a project for non-business passion.  A very competent ship’s captain.  And a wealthy egotist who accepts tripling his original budget and spends $46,000,000 of his own money seeking immortality.

I finished reading the excellent SPAIN IN THEIR HEARTS about the Americans and British who fought in the Spanish Civil War, among them Bob Merriman who commanded the Abraham Lincoln Battalion of the International Brigades.  Six months before he was killed in 1938 at age 29 he wrote, “Life has been full because I made it so.”

I am a creature of words immorally written and read alone.  But sometimes words fail.  Music fails.  They did last night.

Increasingly I long for the open ocean, to dwell again in the monastery of the sea.  And there is no prospect of that happening.  I am likely to be away from GANNET for at least five months.  A few weeks in Hilton Head will be a welcomed change.